Posted by takebackthesky on December 10, 2014
Posted in: Press Coverage, Updates. Leave a comment

Early yesterday, Take Back the Sky received final approval and was granted full press accreditation by NASA to attend and report on the next launch of the Dragon space capsule live at Kennedy Space Center next week.

The space center will welcome TBtS as part of a select group of respected online journalists in a two-day event comprised of exclusive press conferences and panels with leading officials in NASA and Space Exploration Technologies (SpaceX). The agency invited Take Back the Sky in recognition of our efforts to engage the people who should care most about continuing manned spaceflight and colonization, science fiction fans and “geeks.”

We here at Take Back the Sky are proud and honored to represent Browncoats at the event, and to serve as the voice of Firefly fans everywhere before NASA and SpaceX. While we’re behind the scenes at KSC, we’ll keep you apprised with live coverage of every development.

Crew Resupply Mission 5, or CRS-5, is the latest unmanned cargo delivery flight of the Dragon spacecraft to the International Space Station (ISS) under NASA’s Commercial Resupply Services contract program to partner with the private sector to expand mankind’s capabilities and reach in space. Among the payloads slated for delivery to the waiting astronauts is the Cloud-Aerosol Transport System (CATS), which will measure clouds, volcanic ash plumes and other airborne particles using a first-of-its-kind, triple-wavelength laser instrument, as well as several nanosatellites to be deployed into orbit from the station’s onboard launcher and experiments to examine human immune system behavior in weightlessness.

This flight will also see an historic first at launch: As part of SpaceX’s continuing efforts to develop reusable rockets, the Falcon 9 carrying the Dragon craft will re-ignite its engines as it falls back to Earth, deploy specially designed legs, and conduct the first landing and recovery of a heavy-lift vehicle on an oceanic platform atop a drone-piloted barge ship in the Atlantic. 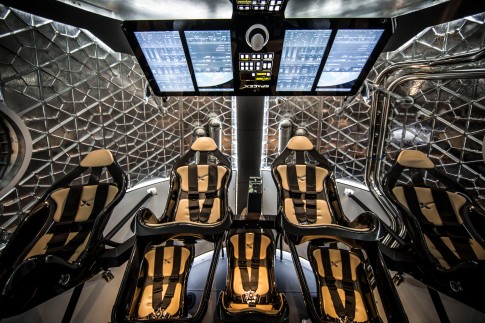 Cockpit interior of the Dragon v2 manned spacecraft, planned for launch in 2017.

This launch marks a crucial milestone on the way to the first manned flight of the Dragon spacecraft carrying astronauts to the ISS. Take Back the Sky is campaigning to encourage SpaceX to name the first-of-the-line Serenity, after the titular ship from the cult hit television program Firefly and summer blockbuster film follow-up, and calls upon Browncoats to help by writing letters to SpaceX CEO Elon Musk and President Gwynne Shotwell.

Being invited to this event is a rare privilege, and the duty we have to the Browncoats here is not lost on us. We’re there for you, so we encourage send us the questions you want to ask NASA and SpaceX in the comments, our direct email, or our social media sites using the hashtag #BrowncoatsAskNASA and we’ll do our best to represent you.

Further details about the launch and the mission are still forthcoming, and we’ll keep you apprised as they are released. The public can see live coverage of the launch online through streams by both NASA and SpaceX leading up to it at .

We aim to misbehave…on federal property.