Remember the last time you spoke with a friend, and realized he’d never seen Firefly before? After you both had a chance to catch your breath after you tackled said friend and pinned him to the ground, do you remember the urgency with which you pleaded with him to watch it, so that he too might have that Whedon-borne life-changing experience? Ever since reading The Martian by Andy Weir recently, I’ve been pressing it upon people in the exact same way (just ask Chris).  Well, okay… maybe minus the tackling and pinning part. 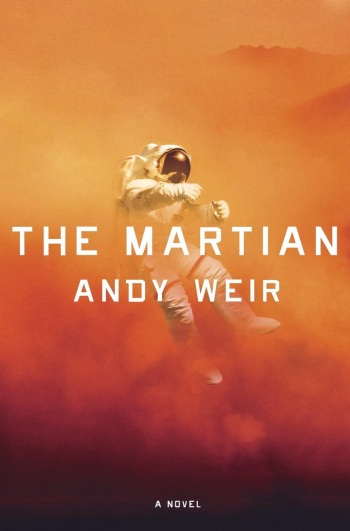 The Martian is a gripping, white-knuckle account of a lone astronaut accidentally left for dead and stranded on the surface of Mars by the rest of his NASA crew.  How’s this for an in-media-res opening:  Flight engineer Mark Watney regains consciousness in a ditch in the middle of a howling Martian dust storm, hours after the rest of his crew has left in their only ride back home to Earth, impaled by part of an antenna in his abdomen– which means his suit is leaking both air and blood! With no one there to help him, he realizes that even if he can survive, somehow crawl back into the airlock and tend to his wounds, the hab module only has enough supplies for 30 days.  Due to the nature of planetary orbits, the next crew won’t be coming to rescue him for over a year!

Not that they’ll be coming to rescue him in the first place, because the only means of communicating with Mission Control is sticking out of his gut at the moment.  Having no means to contact and counsel with NASA back on Earth, Watney is forced to get by on sheer determination and clever ingenuity.

The novel’s publication is itself a tale of determination on the part of the author.  After completing his exhaustively researched work, Weir was turned down by every literary agent he approached.  Rather than “lay down and die,” as Mal would say, he self-published the novel in its entirety for free online.  The book’s enormous popularity then finally caught the attention of Amazon and a print publisher, and a film adaptation directed by Ridley Scott and starring Matt Damon is due out later this year.

Have I mentioned it’s a page-turner? It’s also everything that Gravity should have been, but failed spectacularly to be.  As an aerospace engineer, I can attest that it shows that Weir absolutely did his homework in researching the science of orbital mechanics, propulsion, and other facets of “rocket science.”  The whole time, I was struck by the urge to actually take notes— you know, just in case I ever find myself on the drift.

Nobody’s perfect.  A few chapters in, I felt like the novel hit some bumps in the form of some pacing issues.  While Weir did an uncommonly great job in portraying the psychological factor in how a real human being would react to being stranded on another planet with no hope of immediate rescue (or how one would react to finding out one had unintentionally left someone else to that fate), The Martian‘s rosy-glasses depiction of NASA being able to move heaven and Earth and burn midnight oil without any political pushback is the one part of the book that strikes me as less than realistic.  We all came together and put aside our differences during the Apollo 13 incident, but I’m confident that today, talking heads from all corners of the political landscape would be pointing fingers and saying, “See? This is why we shouldn’t be sending people there, and why we shouldn’t allow anyone else to!”

The Martian is a fantastic read for all Browncoats, especially if you like the Firefly episode “Out of Gas.”  Go read it, before Hollywood script writers water down the story and ruin it! — Jeff