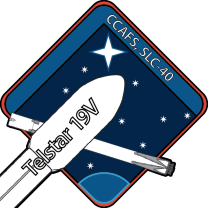 In the early hours of Sunday, the 22nd of July, Space Exploration Technologies (SpaceX) will launch the Telstar 19 Vantage (or 19V) high-bandwidth satellite aboard the Falcon 9 rocket between the hours of 0150-0550, EST.

Having successfully completing a static fire of the engines earlier this week as part of SpaceX’s signature pre-launch procedures, the U.S.-manufactured, Canadian-owned craft will lift off from Cape Kennedy Space Center aboard SpaceX’s workhorse rocket into a geosynchronous orbit, where it will provide broadband services to North and South America, the Caribbean, and other parts of the Atlantic ocean for fifteen years. The most recent weather forecast suggests a 60% “GO” chance of favorable launch conditions.

The flight will be the company’s second mission utilizing the new, upgraded variant of the Falcon 9, called “Block 5,” which Musk has stated will likely be the final version of the vehicle before SpaceX manufactures a new product, ostensibly the “BFR” intended to bring his vision of mass emigration and colonization of Mars to fruition. The rocket’s first stage will land on SpaceX’s floating pad, Of Course I Still Love You, in the Atlantic Ocean.

A live webcast of the launch will begin approximately 20 minutes before liftoff at spacex.com and on the company’s YouTube channel.