This is the second half of Jeff Cunningham’s two-part coverage of the NASA SOCIAL press event for the ICON atmospheric probe. As a disclosure, Jeff is employed by the Lockheed-Martin corporation, the original makers of the L-1011 Stargazer aircraft now operated by Northrop-Grumman mentioned in this article, though his employment is completely unrelated to said craft.

After the unexpectedly cathartic visit to the Vehicle Assembly Building (VAB) and a lunch break, we were shuttled to the NASA press facilities overlooking the launch complexes.

Left: Approaching the NASA Press Briefing Room and television studio. Right: The view from the building of one of the former space shuttle launch pads. 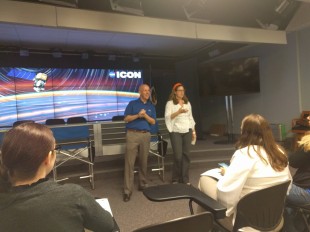 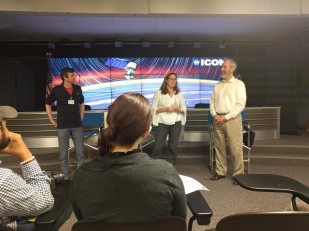 We took our seats, and finally got down to business for the real reason we were here. We were addressed and were free to ask questions of:

They also gave us an idea of the unique challenge involved with the launch. The Pegasus XL is a rocket that is actually dropped from high altitude by a heavily modified Lockheed L1011 (christened Stargazer) before igniting the engines and arching upwards towards space to deploy its payload in a lower orbit. In order for the launch to succeed, Stargazer’s crew must drop the vehicle in a “drop box” measuring only 10 by 40 km — a narrow window to hit at cruising speeds.

Once it makes it out into the Black, just what does ICON do? The Ionospheric Connection Explorer uses a series of instruments to study the interaction between Earth’s high-altitude weather systems and “space weather” phenomena in the ionosphere — which has a profound impact on the performance of satellites and spacecraft, and may well be the difference in just how many bars or “G’s” your smartphone’s network enjoys. After a one-week “shakedown” in orbit, it’ll start powering up sensors built by UT Dallas, UC Berkeley, and the US Naval Research Laboratory, calibrating itself using the light of three full moons. Following that, it’ll commence it’s two-year mission to advance our understanding of space weather.

After the briefing, our next stop, if you’ll believe it, was mission control — not the same one that’s used for crewed missions, mind you, but still the actual command and control stations used by NASA and partners for commercial launches, be it underslung Pegasus launches, or SpaceX Crew Resupply Services (CRS) launches aboard Falcon 9’s.

In the lobby of the USAF hangar used for comms and telemetry for the launch and mission.

These particular control rooms are within the Cape Canaveral United States Air Force Base, where photography is restricted, though we were assured that we were in the clear for the interior of the building. 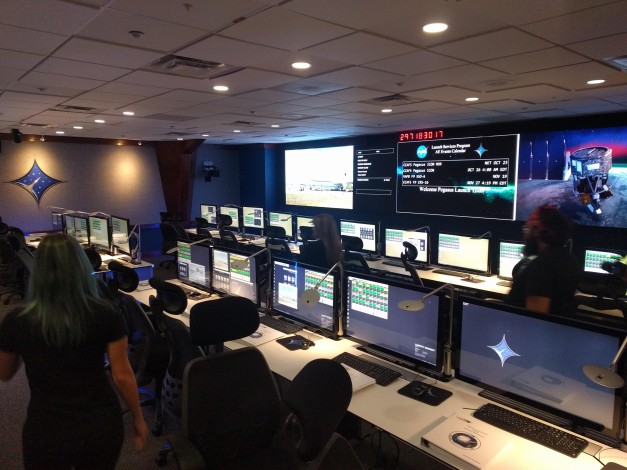 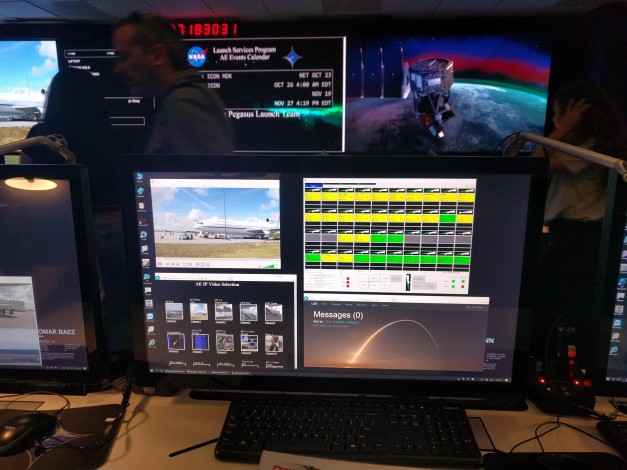 The Mission Director’s Center as it appeared in 1963

After that was the main event, when they bused us out to the “skid strip” to see Stargazer itself on the runway with ICON loaded in the Pegasus XL on the underside. Unfortunately, as it is a restricted Air Force Base, we weren’t allowed to take any photos, so I’m afraid all I can give you here is stock photos from Google as I try my best to describe the tour of the craft. 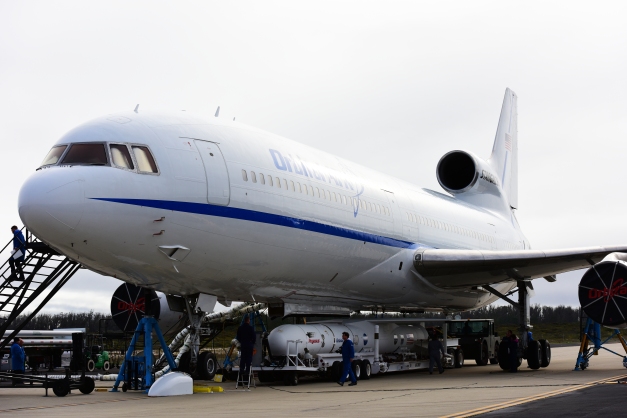 For a plane sitting on the runway, it had a lot of activity buzzing around it — though I suppose a live solid-fuel rocket isn’t something one can just set aside and neglect. Much like the photo above of a previous mission, air conditioning trucks and generators must continually pipe in a steady flow of cool nitrogen gas into the payload compartment of the Pegasus in order to maintain the original, clean-room sterility of the spacecraft.

The plane itself, the L-1011, is largely unknown to the public, because in its day, it lost out to its competitor, a modest aircraft you may have heard of called the 747. This particular one was purchased from a Canadian airline that was retiring it (“for less than a Tesla,” they kept saying, though they declined to comment on just which model they meant). There’re only a few remaining in the world, and even fewer pilots qualified to fly it — which may be why Stargazer’s part-time flight crew were some of the coolest customers I’d met at the Cape. Gregarious as your favorite uncle, and just as comfortable in their blue flight suits as Jimmy Buffett in a Hawaiian shirt.

The plane requires a crew of three, as it was one of the last modern airplanes to require a flight engineer instead of having a fully automated system as the 747 did (no doubt part of why one is still with us and the other nearly extinct). Each of the three men took groups of us through their ship, starting at the cockpit — where yours truly assumed the captain’s seat, because of course, and placed my hand on the Big Red Button because that’s what you do if you have a pulse.

Behind the flight cabin were the instrument stations where workers were performing maintenance on workstations that would monitor and relay the Pegasus’ telemetry among the few rows of remaining seats. Most of the seats, insulation, and even toilets were torn out of the craft during its modification to reduce its weight and free up greater capacity for the payload that was attached beneath our feet — it turns out that the L-1011 wasn’t selected just because it was cheap, but because it sports a very unique airframe structure unlike any other passenger jetliner, and was the only in existence that had a strong enough underside to carry a rocket.

After shaking hands and saying our goodbyes, it was time to get back on the bus and return to our cars and normal, boring lives. It gave me time to reflect as I watched the palm trees and occasional bald eagle nests pass by. After 2011, I’d grown accustomed to “the new normal,” and come to accept that NASA and the Cape may never know its former glory again, with the exception of a few bright, rising stars such as SpaceX and Blue Origin. I couldn’t be more happy to be proven wrong, and to have my “faith” in it all restored, if you will. Heck, it gets me thinking that there may yet be hope that I’ll get to live the dream and work out here someday.

Very, very special thanks to @NASASOCIAL for inviting us to this press event.