End of the Beginning: CRS-20 Makes the Impossible Old News

Posted by Chris Tobias on March 9, 2020
Posted in: Launches. Leave a comment

Just before midnight on Friday night, SpaceX launched a Dragon cargo spacecraft towards the International Space Station. This launch marked several significant milestones in the democratization of space:

Lastly, lest we forget, this was the twentieth commercial re-supply flight — what once was openly derided as “impossible” for smaller, upstart private organizations to do is now routine. Crazy to think about, isn’t it?

NASA was kind enough to welcome us back for a NASA SOCIAL event, our first ever for a SpaceX launch. Much of it are things we’ve already shown you, so we’ll give you some of the highlights before we get to the Main Event itself. 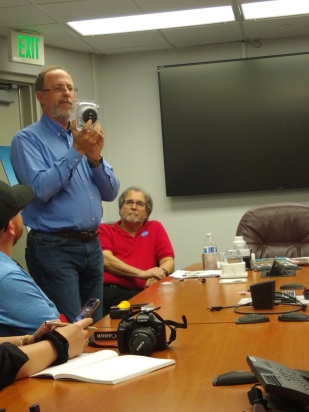 Our first stop, as always, was the press briefing area where NASA scientists with TechShot spoke to us about a new technology, developed by them, that would be delivered to the station aboard this flight. In the past, we’ve told you about the station’s VEGGIE space farming apparatus that has successfully yielded pick-and-eat crops for the astronaut crews. Up until now, they’ve used a simple “pillow” system for the seeds that’s very similar to what some analogous setups use here on Earth-That-Was. NASA scientists, however, wanted something that could more accurately and precisely measure and control how much water was being fed into the substrate (fancy term for soil), and disperse it more evenly while doing so.

Their prototype, we were told, was actually built out of ordinary plumbing supplies from your average hardware store to prove the concept. Though successful, they soon hit a snag, and discovered that it was kinda difficult to manufacture the thing as one piece. NASA TechShot reached out to the private sector for help, and, of all people, Tupperware came to the rescue. It turns out that Tupperware had a special method of injection molding they’d invented that they were happy to share for the sake of science. Not all heroes have long coats of brownish color, I guess.

Part of the Signal

Then came a most unexpected surprise — we were all part of a legit press conference broadcast live on NASA TV and online for the What’s Onboard Briefing. Yours Truly did his best to represent Browncoats and appear erudite and articulate, only to look angry and constipated on live television. Can’t win them all.

Researchers from Boston University, representatives from Airbus that worked on the Bartolomeo platform and others took the stage and fielded questions from our little gathering of pretend journalists.

That was all prologue, though. We were superbly fortunate to be allowed to witness the launch from the press stands. As in, the very yard at the foot of the Vehicle Assembly Building where very well-dressed reporters covered the Apollo launches in front of the iconic giant countdown clock. 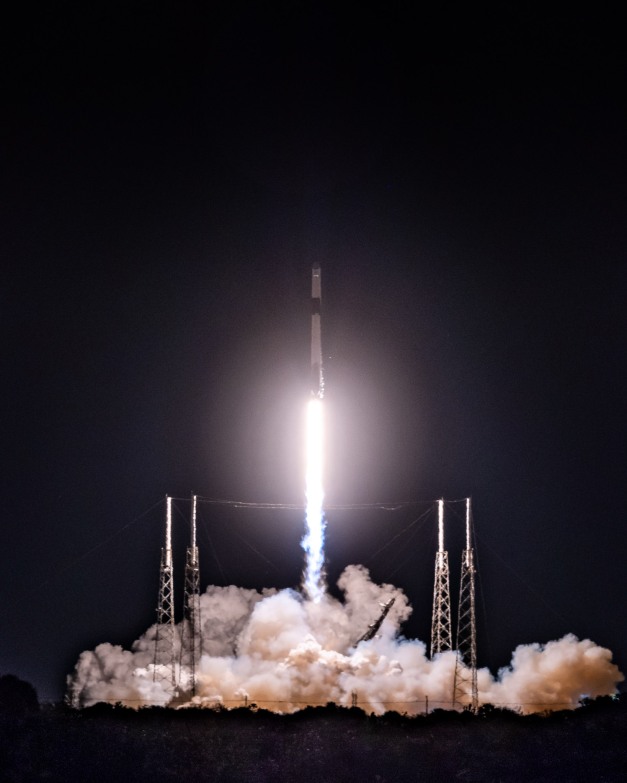 It was a little chilly (for Florida) and windy for our tastes, but my experience has been that something about colder, crisp night air makes for mind-blowing visual effects, and tonight was no exception. Easily in my top three launches that I’ve ever seen in my lifetime. The stage separation created this hauntingly beautiful hourglass-shaped cloud that stretched between the first and second stages rocketing away from each other — if only I owned a camera that was capable of doing it justice.

Then, if that wasn’t enough, this was one of the rare launches where the first stage was recovered at the Cape instead of on a floating oceanic barge. We all squinted into the blackness, wondering if this or that flickering pinpoint was the returning stage. Suddenly, a brilliant orange fire alighted directly above our heads and scared the behoovah out of us, looked like the gorramned thing was about to come down on our heads! It arced in and nailed the landing, though, as the perfect ending to a memorable evening.

What to do When You’ve Done the Impossible

So, what happens now that the first CRS contract is done? Fly the next one! A new batch of resupply flights has been contracted out. In the coming months and years, expect to see the new, crew-capable variant of Dragon, and the first flights of Sierra Nevada’s DreamChaser mini-shuttle, which will be the first winged orbiter in space since the shuttle era. To borrow a phrase from Mal, it’s getting mighty crowded in our skies — and that’s why it’s a great time to be alive.