Firefly:  The Ghost Machine is the third original Firefly novel from Titan Books, and the third by New York Times bestselling author James Lovegrove (The Age of Odin).  Much like Lovegrove’s previous two novels set in the Firefly ‘verse, 2018’s Big Damn Hero and 2019’s The Magnificent Nine, this latest effort reads for the most part like a lost episode of the series.  Unlike the previous two books, however, this novel takes a unique and somewhat bold approach in that the vast majority of the story takes place only in the unconscious minds of Serenity’s crew, in alternate realities of their own design. 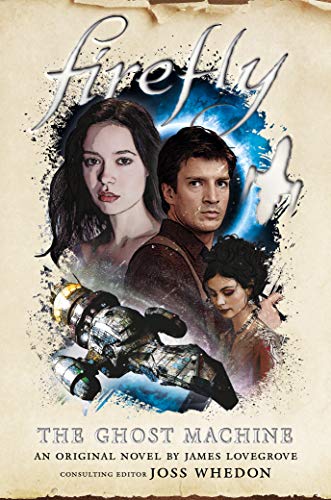 This story, which takes place after the events in Firefly but before the events of Serenity, begins as most tales of the ‘verse do.  Malcolm Reynolds and his crew (minus Shepherd Book and Inara Serra, who at this point have both already left the ship) are hired by Badger to retrieve illegal cargo from Canterbury and transport it to Persephone, where a buyer is waiting.  When the crew arrives at the rendezvous, Mal sees that the cargo is a flightcase stamped with the Blue Sun logo that likely contains Alliance-funded tech that was stolen from a nearby R&D facility, and decides to scrub the mission.  He and his crew are desperate, but not desperate enough to risk smuggling an item this hot out of an area that’s swarming with Alliance ships that are almost as keen to regain the stolen property as they are to find the two fugitives that have been hiding aboard Serenity for several months.

Unbeknownst to Mal, Jayne Cobb isn’t willing to pass on the potential payday, and sneaks the cargo aboard Serenity in the hopes of bringing it to Badger and securing the payment for himself.  When Jayne stows the case in a secret compartment in his cabin, however, its contents begin to have a strange effect on the crew.

At this point the novel becomes what DC Comics would refer to as an “Elseworlds” tale– a story that takes place outside of the regular canon of the ‘verse.  The crew members suddenly find themselves living lives based on their deepest desires.  Jayne is back home on the Cobb homestead with his mother and his brother Matty, who has miraculously recovered from Damplung.  Hoban “Wash” Washburne is suddenly the pilot of the most advanced cruiser money can buy, and he and his wife Zoe own of one of the most lucrative transport businesses in the ‘verse.  Simon Tam is a successful surgeon on Osiris who also happens to be carrying on a secret romantic relationship with a certain very attractive and perpetually cheerful local mechanic.  Mal is retired and living on Sihnon with his wife, Inara, and their two children.  Zoe Alleyne is a bounty hunter who hunts down Alliance war criminals for the fledgling government of the Independents, who recently won the Unification War.  Kaylee Frye is a full-time mechanic and a full partner in the business she operates with her father, who is alive.

River Tam, in the meantime, struggles to shrug off the effects of the latest drug Simon gave her while simultaneously experiencing all of the hallucinations had by the other members of the crew.  And when these fantasies inevitably go sour, and Serenity and her crew end up in extreme peril– both in their dreams and in the real world– it is River (who suddenly and inexplicably finds herself very lucid) who is the only one who has any hope of saving them from certain doom.

As with all the Titan Firefly novels, the presentation of the book is gorgeous.  The cover art is very attractive, and the weathered look of the dust cover and the pages themselves gives the book a very “Browncoat-friendly” appearance.  The novel even comes with its own attached satiny bookmark, which is a shiny finishing touch, as is the word “Firefly” written in Chinese at the top of the spine on the dust cover.  Make no mistake about it, the novels in this series look all kinds of pretty sitting next to one another on a Browncoat’s bookshelf.

Compared to the other two novels, Lovegrove tends to be a little heavy on the exposition early on in the story, and he violates the “show, don’t tell” rule of prose writing on more than one occasion.  He seems to kick that habit once the story shifts to the crew members’ individual fantasy worlds though, and Browncoats will enjoy the fact that he finds a way to include cameo appearances by several of the supporting characters from the original Firefly television series, including Badger, Adelai Niska, Atherton Wing, Sir Warwick Harrow and Durran Haymer.

Although Shepherd Book and Inara Serra have already left Serenity by the time this story takes place, that doesn’t mean they have no part in this tale.  Inara’s role in Mal’s fantasy world is very much what one would expect of her, but Book’s appearance in Zoe’s what-if scenario provides an interesting glimpse of a very different side of his character.

In the end, it is no coincidence that the planet from which the crew extracts the Ghost Machine is called Canterbury.  The book is very much like a Firefly version of The Canterbury Tales, with each individual crew member as the focus of a completely different story.  There is no denying Lovegrove’s skill as a writer, and the stories themselves are interesting enough, but this Browncoat ultimately found the novel a little less enjoyable than its two predecessors, mostly because so much of the book is taken up by events that aren’t really a part of the Firefly canon, with the characters (Mal, Zoe and Book in particular) often doing things that are completely out of character as we know them.  That said, Lovegrove does have an excellent grasp of the characters and the overall tone of the Firefly ‘verse, and unlike the current Firefly comics series from Boom! Studios, he also deftly incorporates Chinese into the dialogue.  All things considered, the novel still reads like an episode of the original TV series, albeit a somewhat bizarre one, and any fan of the original characters and stories that Joss Whedon created is still likely to enjoy it.  This Browncoat gives it a solid “B.”

Firefly:  The Ghost Machine has a manufacturer’s suggested retail price of $24.95, and is available now from major booksellers like Amazon and Barnes & Noble (which is currently offering an exclusive edition hat includes a variant cover, an exclusive additional short story and four Firefly-themed recipes).

The next Firefly novel in Titan’s series, Tim Lebbon’s Generations, is scheduled for release in October of this year.