In the wake of a successful launch of the first wave of its own Starlink communications satellites, SpaceX looks to return to contracted missions when it launches the RADARSAT Constellation Mission (RCM) for the Canadian Space Agency this week. 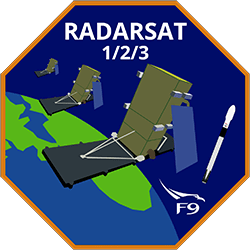 The launch window for the mission opens this Wednesday, June 12 at 10:17am EST (14:17 UTC) from Space Launch Complex 4 (SLC-4) at Vandenberg Air Force Base in California.

The mission’s $1 billion payload will be a fleet of three satellites designed to provide C-band data to the Canadian government and offer maritime surveillance, disaster management and ecosystem monitoring, according to the Canadian Space Agency.

The Falcon 9 booster being used for this launch was previously flown for the Crew Dragon Demo-1 mission back in March.  The CSA had initially wanted a brand new booster for the mission, but eventually settled on a previously-flown rocket in order to avoid any additional delays associated with the production of a new booster.

Following the launch, SpaceX will attempt another landing of the first stage of the Falcon 9 at Landing Zone 4 (formerly Space Launch Complex-4W) at VAFB.  If successful, it will be the second land-based recovery of a Falcon 9 booster on the West Coast.  (The first one occurred last October.)  Officials at Vandenberg Air Force Base issued a warning that the Falcon 9’s return could cause one or more sonic booms that may be audible throughout Santa Barbara, Ventura and San Luis Obispo counties.

For those who would like to view the launch, the SpaceX webcast of the mission should go live approximately 20 minutes before liftoff at spacex.com and on the company’s YouTube channel.