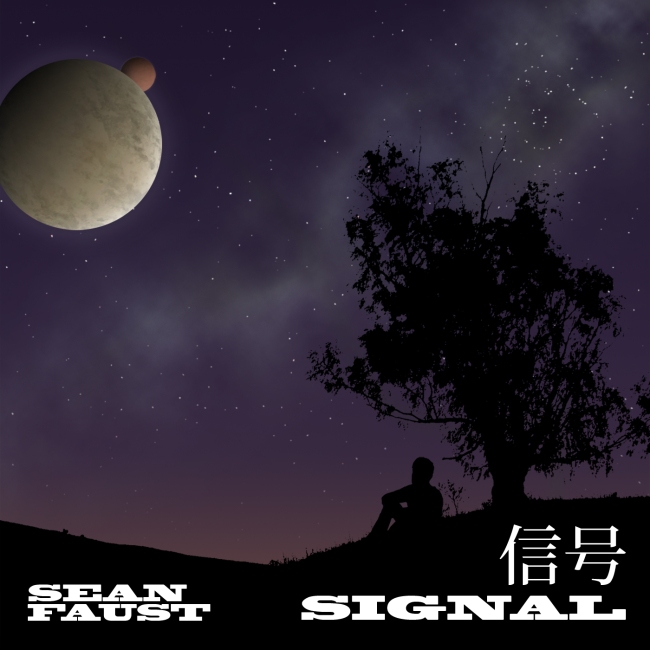 Over the years, Browncoats the world over have found a variety of creative ways to express their love of Firefly and Serenity.  One of the most unique has been through song, and Firefly-friendly artists like the Bedlam Bards and Marian Call are quite well known in the Browncoat community.

Another musician with whom more and more Browncoats are becoming well acquainted is Sean Faust.  Faust, who lives in Bergen County, New Jersey, has become a regular fixture at CSTS events in the New York/New Jersey/Philadelphia area in recent years.  His new song “Signal,” which was inspired by the movie Serenity, was released on May 20, and Faust will be donating a portion of the proceeds from its sales to Equality Now through Can’t Stop the Serenity.

Take Back the Sky recently interviewed Sean Faust about the new single, as well as his love of music and the Firefly ‘verse.

TAKE BACK THE SKY: The intricate guitar work and layered sound we hear on “Signal” reminds me of bands like Rush and Steve Howe-era Yes at times, and I know from our previous conversations that you and I have a mutual fondness for the Texas power trio King’s X.  Can you tell us a bit about some of the artists that have influenced your development as a musician and songwriter?

SEAN FAUST: My first musical love was actually film scores.  I could go on for days about that genre alone! Then one day, I discovered Pink Floyd and I’ve been in love since.  Along the way I found myself leaning more towards bands that really stood out on their own instead of sounding like their genre counterparts.  For me in the late 80’s it was Tesla and Savatage.  The 90’s turned me onto Live, King’s X, and Toad The Wet Sprocket.  Somewhere in the mid-90’s I discovered Grateful Dead.  One day many years later I fell in love with Phish (who I consider to be more Frank Zappa than Grateful Dead).  As you mentioned before, we’re both really in(to) Rush and Yes.  Progressive rock has always been my second musical love right after film scores.  Dream Theater is a really huge influence on me in that genre.  Their sound was like Metallica met Rush met Pink Floyd.  Also impressive to my young ears was their musical prowess.  Nowadays, I still love all of the aforementioned artists yet I find myself leaning towards something simpler.  Not a genre or musical prowess or psychedelia or whatnot.  These days I just appreciate a good song.

TBTS: How long have you been playing guitar? When did you know you wanted to be a songwriter and performer?

SF: For as far back as I can remember I had always wanted to be a both a songwriter and a performer.  Having been playing the piano since the age of four (with a short break I’ll just refer to as my “stupid teenage years”) I loved writing tunes.  At some point, though, guitar was just something I wanted to do.  I always loved how expressive David Gilmour sounded.  I dug the “acrobatics” of guys like Joe Satriani, Steve Vai, and Paul Gilbert (to name a few).  So I thought I’d take my shot at that.  After a few years, I went back to keyboards full time until I started teaching.  Guitar and I fell in love with each other again.  To answer as honestly as possible about how long I’ve been playing guitar I can only say that I’m still learning.

TBTS: Take Back the Sky co-founder Jeff Cunningham tells me you do a version of the Firefly theme song that rivals Sonny Rhodes’, and I know you’ve performed “The Hero of Canton” live as well.  Do you ever include those songs in your live shows, and if so, how do your non-Browncoat audiences react to them?

SF: That is one hell of a compliment!  Jeff…. I love you for saying that, but I’m not sure I can agree.  I can just humbly accept. I do perform “The Ballad of Serenity” live occasionally.  Folks not in the Browncoat community seem to like it.  The icing is always talking to somebody after a set that was really jazzed by hearing it since they too are huge fans of the ‘verse!

TBTS: I understand you were involved in an effort to set a world record for the most people singing “The Hero of Canton” live on stage, which I think you set at CSTS Philadelphia a few years back.  Since then, Browncoats as far away as Australia have tried to break the record.  Can you tell us how that idea came about? Do you know who holds the record now and what it is?

SF: I’ve always had a tough time remembering the words for “Hero Of Canton”.  I don’t know why.  The idea came to me only a few days before CSTS Philly 2012.  Everybody involved seemed to like the idea!  And let me tell you…. that was an awesome time!  We did it again with a bigger count in 2013 too! It’s such a huge community.  I know I should have been more specific and said something about performing with a live musician, but…. who cares? There are very very shiny folk out there who are doing it as well.  As long as people are doing it, that’s pretty kick ass! I know we started with 42 (including a dog!).  Then, and I wish I could tell you who but I honestly forget, we got beaten by over 30 more people.  We came really close to it in Philly last year! I think we were two people shy.  For all I know that record has been broken as well.  I would love to see a really large room (or theater) just completely packed with people doing that! Of course, I’d love to be there with my guitar counting it off as well!

TBTS: You have been active with Can’t Stop the Serenity for several years, and you’re donating a portion of the proceeds from sales of “Signal” to Equality Now.  Exactly how long have you been involved with CSTS? How did you first get involved? Have you played live at any other CSTS events besides CSTS Philly?

SF: I believe this will be my third consecutive year in a row in Philly.  I had done it once before, I believe, in 2007.  There’s just something about that community! I’m honored that I’m even allowed to return to perform every year! I’ve said it many times before and I mean it sincerely.  CSTS is my favorite show of the year.  I was fortunate enough to do CSTS NYC last year.  Unfortunately, my schedule prevents me from being able to do it this year.  I’m crossing my fingers for 2015, though! I had a fantastic time and folks in the NYC area will love it as well! I’m also hoping to spread my wings a little more this year and get out to CSTS Pittsburgh! I’m sure you knew that already.  (Writer’s note: I surely did, as this writer also happens to be the chairperson for CSTS Pittsburgh!)

TBTS: Were you on board with Firefly from the very beginning, or did you find out about the show later? When and how exactly did you discover the show?

SF: I vaguely remember seeing commercials for it, but never caught it when it was on. When I saw the trailer for Serenity a few times I was intrigued. It looked like it would be a ton of fun.  When I got around to renting it (the trouble with gigging a lot is that sometimes I’ll miss a movie in the theaters) I loved it.  A few months later it was on cable and my wife and I watched it.  I said, “Okay.  I’m renting the show.  I need to know where these awesome people came from.”  Disc 1 came in the mail.  After 2 episodes I removed the other discs from my queue and ordered the box set.  Of course, I did finish watching the first disc.

TBTS: Obviously you’ve found Firefly and Serenity to be inspirational as a songwriter and a musician.  What is it about the Firefly ‘verse that strikes a chord with you on a personal level?

SF: You know…. It’s honestly the community that loves the show and the film.  Browncoats are a very unique group of people and I’m really happy that I get to share my love for the ‘verse with them.

TBTS: Can you tell us a little bit about the cover art for “Signal?” Was it your concept?

SF: Actually, no.  The concept was my wife’s.  My only contributions were the hidden smiley face (you’ll find it) and having the name of the song also in Mandarin.  Everything else is Deb’s work and I’m really really really really happy with how it came out!

TBTS: Is there any one aspect of “Signal” that you’re most proud of?

SF: I would have to say the feedback that I’ve been getting, from the musicians involved to the Browncoats who heard an advanced edit.  I’ve been really excited for this release.  Now that it’s out, I hope Browncoats everywhere get to sink their teeth into it and, with doing so, help make a difference.

TBTS:  Is this the first original music you’ve written that was inspired by the Firefly ‘verse?

SF: I guess you could say that.  I performed a song called “Browncoats and Flying Saucers” for my live CD a few years back.  The song isn’t necessarily ‘verse-related, but there are a few references here and there.

TBTS: You wear many hats:  musician, singer, songwriter, live performer, music instructor, recording artist, and (of course) the very cunning hat of a Browncoat.  What else would you like folk to know about Sean Faust?

SF: What else would they like to know? I’m an open book. (Writer’s note: If you have a question for Sean, or would like to contact him for any reason, he can be reached at http://seanfaustmusic.com.)

TBTS: What would it mean to you as a Browncoat to see a manned American spacecraft named Serenity? When that ship finally launches into the black, would you come play the launch party for us?

SF: That would be spectacular!  I would be honored to play that launch party!

TBTS: What’s the next project you have on the horizon?

SF: A few months ago, just out of the blue, I started writing a book.  Kind of like the memoir of a musician you haven’t heard of.  It’s fun to reflect on a lot of what’s happened in my music career.  I’m hoping people will enjoy that read as well.  It’ll be short and to the point.  I’ll be heading into the studio sometime mid-summer to begin production on my next album, as well as finishing vocals and keyboards for progressive rock act Money for the Toll.  The latter is a labor of love that we’re very much looking forward to finishing.  So please go to http://seanfaustmusic.com and get on the mailing list! Lots of goodness coming up!

TBTS: Before we wrap up, can you tell our readers how they can get their own copy of “Signal?” I know Jayne would like the fact that you’ve given us options.

SF: The main link for the song is http://www.cdbaby.com/cd/seanfaust7. However, it is also available on iTunes, etc.

Take Back the Sky would like to thank Sean Faust for taking the time to answer our questions, and we wish him all the best with the release of “Signal” and all of his future musical endeavors.

If you’re a Browncoat who appreciates quality music, we urge you to give “Signal” a listen.  Then be sure to purchase a download of the single, so you can enjoy a great song that’s inspired by the shiniest movie in the ‘verse while helping the fine folk at Equality Now.

After all, you can’t stop the signal…