Dragon being mated to rocket for mission CRS-3

In the cult favorite sci-fi-western series Firefly, the crew seek freedom and fortune among the stars aboard a craft that, we’re told, is classified as a Class III Firefly medium transport. Now, details have been announced by Space Exploration Technologies that will tell us at long last just what kind of ship her real-life counterpart will be.

SpaceX will unveil the Dragon v2 (or, alternately, Mark II) to the world during a live webcast Thursday, the 29th of May, at 7 PM PDT/10 PM EST. CEO Elon Musk confirms that, life support systems and bucket seats aside, this is the model and variant of the independently and privately developed space craft that will one day restore the capability to take astronauts into space for NASA and their international counterparts.

While most details surrounding the new ship will be revealed tomorrow, the one thing we know for sure is that the Mark II Dragon will already make history as the first American-made spacecraft capable of powered landings. That means that it actually lands using rocket engines to make a completely controlled descent and precise landing under its own power. 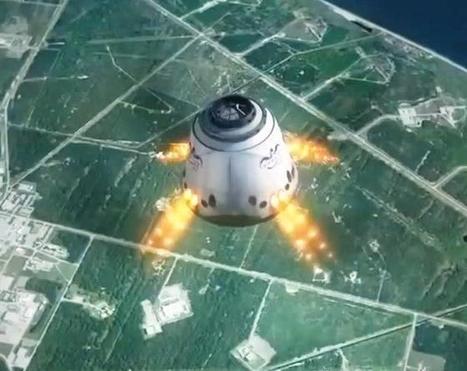 For those of you playing the home game, the Apollo spacecraft that took us to the moon returned to Earth with parachutes after aiming in the general direction of “the blue stuff” and splashed down in the ocean wherever it happened to, while the recently cancelled space shuttle came back to Earth as an unpowered glider, ending every mission with a you-only-get-one-shot-at-this landing with no ability to pull up, come back around, and try again. The Soyuz, for which Russia charges upwards of $70 million per seat, slows a little at a time with atmospheric braking like the Apollo and shuttle, parachutes, and a brief firing of its engines before making a barely-controlled crash, tumbling end-over-end several times before coming to a stop somewhere in the deserts of Kazakhstan.

Watch the live webcast with us–and while you’re at it, if you want to speak up in their live chat for the event or tweet during the press conference to, oh, I don’t know, suggest a good name for the first one that carries a crew, then by all means, be our guest and use a hashtag.

Ladies and menfolk, this brings us one step closer to seeing our ship finally break atmo.