Ni hao again, fellow travelers, and best wishes for the new year! Today we’ll be introducing you to another one of the four astronauts pegged to be the first crew of the next fleet of American, privately-made spacecraft– meaning if our campaign to urge SpaceX to name their first-of-the-line Dragon capsule ship after Serenity succeeds, it’s entirely possible she could be its captain. 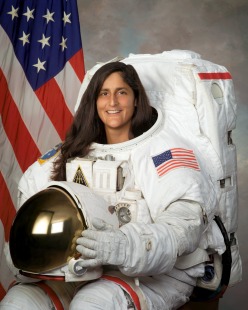 Captain Sunita “Suni” Williams, US Navy, calls Massachusetts home, where she attended high school as the youngest of three siblings born to a father and mother descended from Indian and Slovenian immigrants, respectively.  After graduating from Florida Tech, she recieved her Basic Diving Officer certification from the Navy, then reporting to Naval Air Training Command.  When she was designated a Naval Aviator two years later, she transferred to Helicopter Combat Support.

Following the completion of her training, she was deployed into active service in the Red Sea, the Mediterranean and the Persian Gulf during Operation Desert Shield and Operation Provide Comfort.  In 1992, destiny had further heroics in store, when she was assigned as Officer-in-Charge of a detachment of H-46 helicopters sent to southern Florida to provide relief to the victims of Hurricane Andrew from the USS Sylvania. 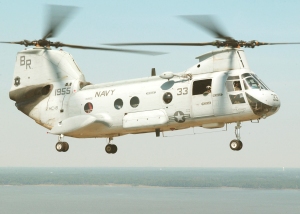 Suni’s first “ship.”  Floats like a downy feather, don’t she?

For those of you who weren’t alive to remember it, at the time, Andrew was the single most destructive hurricane in American history.  If we adjust for inflation to 2015, the Category 5 storm caused just shy of half a trillion dollars of damage, destroying over 25,000 homes in Miami-Dade County alone, and an additional 100,000 across the other affected areas.  Suffice it to say, as Mal would no doubt have put it, Suni’s “dramatic entrance did not go amiss.”

After wrapping up relief operations, she was accepted into the prestigious U.S. Naval Test Flight School in 1993.  Following graduation, Williams was assigned to the Rotary Wing Aircraft Test Directorate as an H-46 Project Officer and V-22 chase pilot in the T-2 Buckeye, then went on to fly test flights in a number of different craft.  Two years later, she became an instructor at the school’s Rotary Wing Department as well as its Safety Officer.

Next, she transferred to the USS Saipan as the ship’s Aircraft Handler and Assistant Air Boss.  It was there that she was accepted into the exclusive group of men and women that is the Astronaut Corps.

After the initial training with NASA, Williams worked in Moscow with the Russian Space Agency on the Russian contribution to the International Space Station and with the three individuals who would become its first crew, Expedition One.  In the course of her service to the agency, she also served as a crew member aboard the Aquarius underwater research station.

Finally, eight years after her acceptance into the astronaut program, Williams’ turn came to fly into the black aboard shuttle Discovery to do a rotation aboard the ISS.  As a devotee of the Hindu god Ganesha, she brought with her a small figurine of the deity and a copy of the Bhagavad Gita, as she would eventually do on each flight into the black.

It was en route to the station that Williams made the first donation to Locks of Love from space, having her ponytail cut off by a fellow crew member to be used for wigs for children undergoing chemotherapy.

After arriving at the space station, Williams found time for another first:  on April 16, 2007, she became the first person to run the Boston Marathon from space using the station’s treadmill, while her sister ran “with” her on Earth.

After landing from her first mission, she served as Deputy Chief of the Astronaut Office– essentially, the second-highest ranking astronaut within NASA.  During her tenure, Williams was able to visit her ancestral village in India, and in the course of her travels she became the first person of Indian decent who was not a citizen of India to be awarded the Sardar Vallabhbhai Patel Vishwa Pratibha Award by the World Gujarati Society.  She didn’t fly a desk for long– in 2009, she returned to the ISS aboard a Russian Soyuz craft to serve as Expedition 32’s flight engineer.

When station commander Gennady Padalka rotated out to return to Earth in September 2012, it was Williams who stepped up in his place for Expedition 33 as the second woman to command the ISS.  Also that month, she ran the first-ever triathalon in space, coinciding with the Nautica Malibu Triathlon in California.  While the space station was equipped with a treadmill and a stationary bike for the relevant portions of the race, for swimming she used the Advanced Resistive Exercise Device (ARED) to perform weightlifting and other exercises against resistance to simulate swimming in microgravity.  In less than two hours, she “swam” half a mile, ran four miles and biked 18 miles.

At this point in her career, Suni Williams has spent a total of 322 days in space, placing her sixth on the list for the all-time U.S. endurance record, second all-time for a woman, and giving her the all-time record for spacewalk hours logged for a female astronaut.  As a member of the Astronaut Corps, a select group of people already known for being high-achievers, she has managed to distinguish herself even among such elite company.  Suni was thus a natural choice to be included along with three other astronauts (dubbed the “Dragon Four” in the press) to pilot the first flights under NASA’s new Commercial Crew partnership, and lead America’s return to space after the demise of the shuttle. 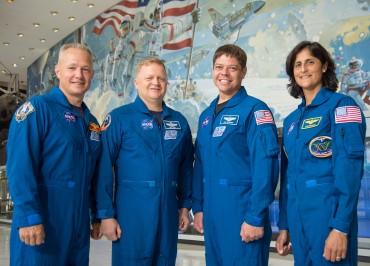 There’s a very good chance that she could not only fly the first Dragon that we’re campaigning to have named after Serenity, but command it— and it helps that her life story reads like something written by Joss Whedon himself.