Posted by takebackthesky on July 17, 2016
Posted in: Uncategorized. Leave a comment

A little after midnight on Sunday night/Monday morning, SpaceX will launch a Dragon spacecraft on its ninth Crew Resupply Mission (CRS-9) to the International Space Station (ISS) under contract to NASA.  This mission will be another one for the history books, for a couple of reasons. 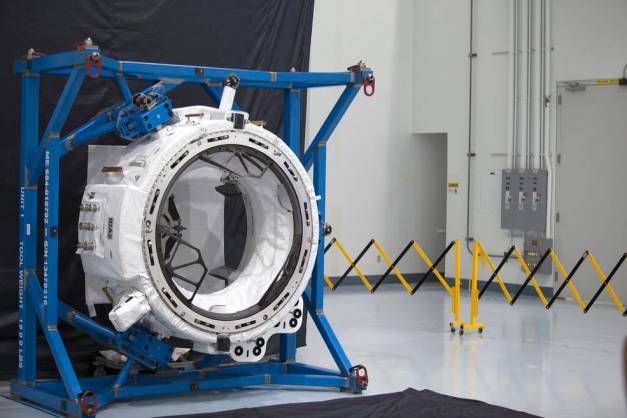 The primary mission of the craft’s automated delivery to the station will be to bring the International Docking Adapter (IDA).  Since the research outpost’s construction first began, means of docking to the station to either attach new modules or deliver crews and supplies have been limited to the American space shuttle docking port– no longer in use since the shuttle program ended in 2011, of course– a Russian port, and a Common Berthing Mechanism.  The latter is actually the common mount on each module of the station that connects each one to the next.  It’s also the most expedient to use to deliver large cargo and equipment shipments, like the big loading bay behind your local big-box retailer that’s made to be the exact same size as a semi-trailer that pulls right up against it.

The advantages of that are much the same as the Earthbound counterpart I’ve just described:  You have the convenience of being able to immediately unload the contents of the vehicle without having to roll out ramps, use elevators, etc.  The drawback is that just “pulling up” to a loading dock until the two touch just won’t cut it in the vacuum of space.  Using the CBM requires an astronaut to secure the connection with bolts, essentially turning the delivery vehicle into a part of the space station.

The new IDA that the Dragon is bringing up won’t have that problem, as it’s engineered to accommodate automated dockings with its androgynous ports (no male or female end like the cords that connect your tech and devices at home). Even more importantly, the adapter’s compatibility extends beyond not having to worry about which end goes where.  As you may have surmised by now, it will be the first spacecraft component to comply to the new open International Docking System Standard (IDSS).

This may come as a surprise to you, but the spacefaring nations of the world still all use proprietary dimensions and mechanisms in their docking systems.  It’s only recently that they’ve all come together and agreed to adopt this one common standard– I know, you’d think they’d have done this ages ago, right? Late is better than never, though, as the IDSS is public domain, meaning any new ship built by any upstart (say, a Browncoat with an “independent streak,” if you know what I mean…) will be potentially able to go anywhere and dock with any station or craft that they encounter.  It’s to space what USB is to your computer and mobile devices! Without that common standard, there’s more than one episode of Firefly that would have just turned out… awkward.  It definitely would have made rescuing Mal in “War Stories” impractical, if not impossible.

Meanwhile, here on Earth-that-Was, the first ships that will utilize the new adapter will likely be the new Crew Dragon that’s making its debut some time within the next year or so, and the Dreamchaser spaceplane.

As if bringing spaceflight into the age of common standards wasn’t enough, SpaceX will also attempt a landing of the first stage as it travels back to Earth faster than a speeding bullet, because of course they would.  Whereas most of the attempts to recover the larger part of the Falcon 9 rocket aboard a drone-piloted oceanic platform have been seemingly hit-or-miss (sorry) propositions, according to the press release, this launch’s “flyback” touchdown will occur on land, where SpaceX has a much better track record:  Last December was their only other attempt to achieve this particular feat, and they nailed it on the first try.

I was actually able to witness it firsthand here in Florida, and I find myself wishing I’d brushed up more on Mandarin swearing as I try to find the words to describe how mind-blowingly amazing it was to see it land, even from as far away as Orlando.  It was just the gorramed-est thing to see it go up just like any other launch down here… only to see it come back down on that same pillar of flame, like a video clip run in reverse and at double speed– like a bat out of hell.  You can bet your coat of a brownish color I’ll be staying up to see that again.  Those of you who want to watch along with us can tune it to SpaceX’s own live broadcast, complete with hosts and commentary.  Or, if you’re like me or Kaylee and already know your way around a rocket and don’t want talking heads holding your hand all the way through, SpaceX’s “technical broadcast” is free of commentary so that you can bask in all the radio-jargon goodness.

After the launch, write SpaceX to let them know how much you enjoyed the launch/landing, and how awesome it would be if the first crewed one to land “like a downy feather” were actually named Serenity.  In fact, those of you headed to Comic-Con this coming week can actually tell SpaceX that in person at their display.  You might even get to try sitting in the captain’s seat of a Dragon mockup! For the love of all that is good and Firefly in this world, if you do that while wearing ‘verse-inspired costumes, please tweet us pictures (@takebackthesky) while you’re busy breaking the internet.