When you’re an innovator in your industry, there’s no time for a summer vacation.  Fresh off the success of its recent CRS-9 resupply mission to the International Space Station, and before Dragon even returns from that mission, SpaceX plans to launch again.

This Sunday, August 14, SpaceX will launch a Falcon9 rocket to deliver the JCSAT-16 satellite into Geostationary Transfer Orbit.  The client for this launch is Japanese satellite operator SKY Perfect JSAT.  Once in orbit, the JCSAT-16 will act as a backup transmitter for the rest of the company’s satellite fleet.  The launch, which will take place at SLC-40 in Cape Canaveral, is scheduled for the early morning hours, with a launch window set to open at 1:26AM, EST.

Although people are starting to take them for granted, SpaceX’s first-stage recoveries are paving the way for true rocket reusability. (Photo:  @NASASpaceflight)

As is almost always the case nowadays, SpaceX will attempt to recover the first stage of the Falcon 9 after launch.  This particular recovery will take place at sea on one of the company’s drone-piloted barges.  Although these landings are beginning to seem routine, it’s important to remember that each one provides valuable data that brings us closer to the day when rocket reusability is commonplace and a trip to the nearest spaceport is no more unusual than driving to the airport is today.

SpaceX’s live webcast of the launch should begin roughly 30 minutes before liftoff at spacex.com.  If you haven’t watched one of their launches live before, you’re missing out on one entertaining experience.  There is nothing stuffy or bland about the young engineers who host the SpaceX webcasts, and the “mission tracker” at the bottom of the screen provides a user-friendly, step-by-step schedule of the major events that will occur during the launch.

During recent launch webcasts, the SpaceX team has dropped references to Battlestar Galactica and The Hitchhiker’s Guide to the Galaxy, and at the conclusion of their webcast of the CRS-9 launch they even included a parody of Pokemon Go.  Of course we here at Take Back the Sky are waiting for a Firefly reference, but even without any specific mention of our favorite mid-bulk transport ship, it’s still pretty obvious that the men and women of SpaceX are geeks just like us, and though they work very hard, it’s easy to see they also have a lot of fun doing what they do– which in this case is making launch coverage a whole lot more informative and fun to watch!

So put on a pot of coffee and tune in Saturday night/Sunday morning to watch along with us as another SpaceX Falcon 9 breaks atmo, and while you’re at it, take a moment to write SpaceX a letter (or send them a leaf) and let them know that when they launch their first Crew Dragon, you want to tune in to watch them launch a manned spaceship named Serenity. 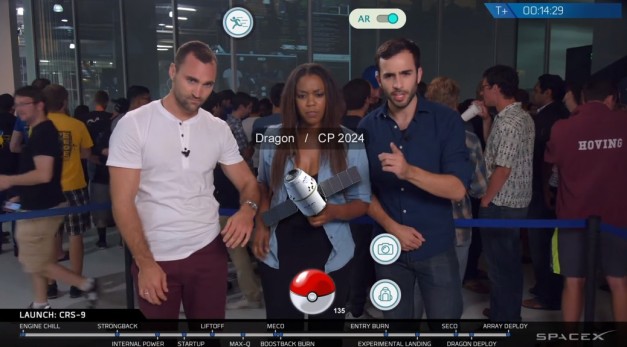 SpaceX’s live, on-screen “mission-tracker” makes it easy to follow their launches every step of the way– because when it comes to the events of a launch like CRS-9, you gotta catch ’em all as they happen! (Photo:  SpaceX)