Next SpaceX Launch Slated for March 14 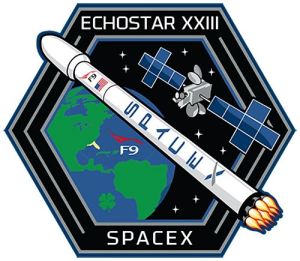 If everything goes according to plan, a SpaceX Falcon 9 will break atmo for the third time this year in the early morning hours of Tuesday, March 14.

This Falcon will be carrying a commercial communications satellite to a Geostationary Transfer Orbit (GTO) for EchoStar Corporation.  According to SpaceX’s mission press kit, the satellite, called EchoStar XXIII, is a highly flexible, Ku-band broadcast satellite services (BSS) satellite with four main reflectors and multiple sub-reflectors that will support multiple mission profiles.

There is a two-and-a-half-hour launch window for this mission, which opens Tuesday morning at 1:34am EDT.  The satellite will be deployed approximately 34 minutes after launch.  This will be SpaceX’s second launch from Launch Complex 39A (LC-39A) at Kennedy Space Center.  There will be no attempt to land the Falcon 9’s first stage after launch because the specific requirements of this mission make landing the booster prohibitive.

One interesting aspect of this mission is that it will likely be the last SpaceX launch that has an Air Force officer ready at the console as part of a traditional flight termination system.  SpaceX’s launch on February 19 marked the first time that responsibility for commanding the rocket to self-destruct lay with computers on board the Falcon instead of a human being monitoring the flight from the Mission Flight Control Officer’s console at Cape Canaveral Air Force Station.  SpaceX is the first and only US launch company approved to use the Automated Flight Safety System, or AFSS, which continually records the rocket’s position and trajectory and commands the rocket to self-destruct if it repeatedly crosses pre-programmed boundary lines or violates flight rules.  With the successful use of the system during the February 19 launch as well as thirteen previous tests in “shadow mode,” there is a high probability that SpaceX will use the AFSS, which is capable of responding faster than a human being could in the event that a flight needs to be terminated, for all future Falcon launches.  (The system has yet to be approved by NASA’s Commercial Crew Program for planned launches of SpaceX’s Crew Dragon, one of which we hope they’ll name after Serenity.)

For those who feel sufficiently recovered from Daylight Saving Time to stay up for it, SpaceX’s launch webcast will go live about 20 minutes before liftoff.

If necessary, a backup launch window opens on Thursday, March 16, at 1:35am EDT.