SpaceX Ready for October 30 Launch of Koreasat 5A

This Monday SpaceX will launch the Koreasat 5A from Launch Complex 39A at Kennedy Space Center in Cape Canaveral, Florida.  The South Korean communications satellite (anyone who keeps up with the daily news knows North Korea prefers to conduct their own launches nowadays) is scheduled to be carried into the black by a Falcon 9 rocket on Monday afternoon.  The launch window opens at 3:34 p.m. EDT (1934 GMT) and extends to 5:58 p.m. EDT (2158 GMT), if necessary. 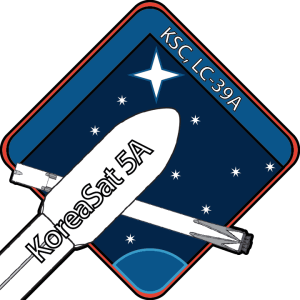 The satellite will be deployed to a geostationary orbit 22,300 miles (35,800 km) over the equator.  As has practically become standard operating procedure for SpaceX, the first stage of the Falcon 9 will land on the drone ship Of Course I Still Love You in the Atlantic Ocean after its work is done.

The mission will be SpaceX’s 16th of the year, and it will also mark the 44th Falcon 9 flight since June of 2010.  Elon Musk’s company continues to demonstrate its reliability as it gears up to return US astronauts to space next summer on board its Crew Dragon, a ship that we hope will be named Serenity after the transport ship in Joss Whedon’s cult sci-fi classic Firefly.

Monday’s launch can be viewed live on SpaceX’s YouTube channel and at spacex.com.  The SpaceX webcast of the launch is expected to go live 20-30 minutes before liftoff.