“Firefly: The Sting” Original Graphic Novel Is a Tale That Didn’t Need Tellin’

If you are a fan of Joss Whedon who has been starved for more tales of the thrilling heroics of Captain Malcolm Reynolds and his crew, then the past few years have been a good time to be a Browncoat.  Fans have seen a whole passel of print hit the shelves– initially in several volumes of Serenity comics and graphic novels published by Dark Horse Comics, and more recently in the form of Firefly prose novels and reference works published by Titan Books and Insight Editions as well as a new ongoing Firefly comics series (and its accompanying one-shot stories and graphic novels) published by Boom! Studios.

The ongoing Firefly comics series from Boom! Studios made its debut in November of 2018, and is set between the events of the Firefly TV series and the motion picture Serenity.  It has introduced a number of interesting new characters and landed the crew in more than a few exciting situations in the 15 issues that have been published so far.  Despite some minor shortcomings (like the fact that it took no less than 13 issues for any of the characters to utter even a single syllable of Chinese), for the most part the plots have been entertaining and have managed to maintain the spirit of Joss Whedon’s original stories and characters– even though the creator of the Firefly ‘verse has had very minimal personal involvement in the project.  (Whedon is officially listed as a “story consultant” for the series.)  The same can be said of Boom! Studios’ Firefly spin-off comics… with one notable exception. 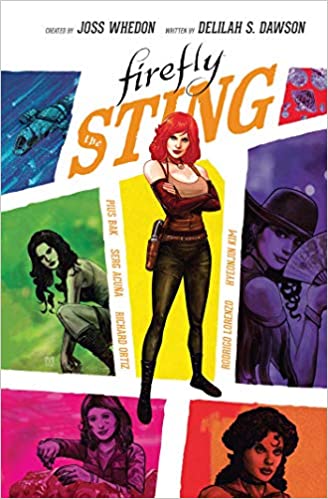 In November of last year, Boom! Studios released Firefly:  The Sting, an original graphic novel (OGN) written by New York Times bestselling writer Delilah S. Dawson, whose numerous writing credits include several books set in the Star Wars universe.  (Dawson collaborated with no less than five different illustrators on this project, one for each of the book’s chapters, though it’s worth noting that the illustrators have similar pencilling styles and the book’s artwork is visually seamless from one chapter to the next.)  The book was announced in June of 2019 with a solicitation that included the following synopsis (as reported on newsarama.com):

“Saffron and the women of Firefly pull the ultimate heist! Saffron– the enigmatic rogue who captured the hearts of Firefly fans worldwide– returns to Serenity.  But this time, she’s got no time for Capt. Malcolm Reynolds, as she’s there to recruit the women of the ship to join her on a heist that has personal stakes for all involved.”

It’d be hard for any dyed-in-the-wool Browncoat not to be intrigued by a story involving Saffron, the criminal-minded opportunist played so deftly by Christina Hendricks in the Firefly episodes “Our Mrs. Reynolds” and “Trash.”  But a heist for which she only recruits the women of Serenity? Sure, she and her “kinda husband” Malcolm Reynolds share a somewhat adversarial past, but if she’s desperate enough to include any members of Serenity’s crew in a scheme she’s conjuring (especially after her last attempt ended with Inara locking her in an automated trash bin), then what reason could she possibly have not to want a skilled pilot like Wash, or someone like Jayne who’d obviously be useful if things turned violent? And if things did go sideways and her gang ended up various degrees of bruised and bloodied, wouldn’t a man like Dr. Simon Tam be just the sort of person she’d want to have around?

This Browncoat was already skeptical, but I still ordered the book.  After all, for the past ten years, no single pop culture brand has meant more to me than the Firefly/Serenity ‘verse.  I have devoted countless hours to the Browncoats fandom, both as a local event coordinator for Can’t Stop the Serenity charity screenings and as co-founder of Take Back the Sky’s ongoing campaign to convince Elon Musk to name SpaceX’s first Crew Dragon space capsule after Serenity.  I count myself among the most passionate of Browncoats who, nearly two decades after Firefly’s debut on Fox, will greet each new official story or officially licensed Firefly or Serenity product with enthusiasm.  Besides, Boom! Studios’ Firefly books had a solid track record of good stories up to this point, and the writer was a best-selling author.

My copy arrived in time for me to take it along on a cross-country flight to the West Coast in mid-December 2019.  Our family was headed to Southern California so my son could play lacrosse in the Legends National Cup, which afforded me the opportunity to read the OGN in one sitting on a nearly five-hour flight from Chicago to San Diego.  I assumed that reading the story uninterrupted from cover to cover would allow me to appreciate the overall narrative better than if I read the chapters as installments.  Ultimately though, I’m not sure it mattered, because from the very onset, this Firefly tale just felt… off.