For many of us Americans, summer is a time to dial it back a bit.  We enjoy a more lazy pace that fits the mild weather and the longer days, and we associate the months of summer with vacations, trips to the ball park and hours spent relaxing on the beach.  Perhaps no weekend of the summer embodies this more than Independence Day weekend, with its tradition of picnics, baseball and fireworks.

It comes as no surprise to us that SpaceX sees things a bit differently. 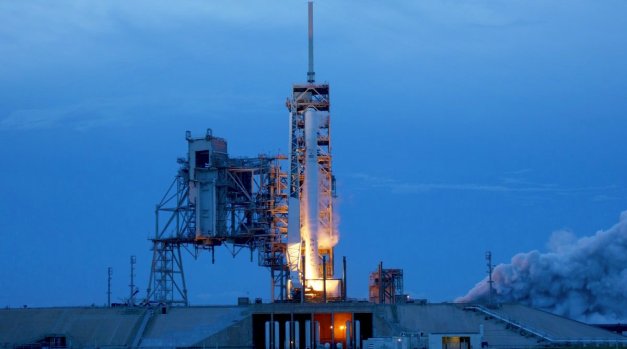 Following two successful Falcon 9 launches last weekend, SpaceX plans to launch again this Sunday, July 2.  This launch, which will be from Launch Complex 39A (LC-39A) at Kennedy Space Center in Cape Canaveral, Florida, has an evening launch window that is set to open at 7:36pm EDT (2336 GMT), and if the weather cooperates (the latest forecasts call that into question) it should make for some spectacular viewing that will rival any 4th of July fireworks display.  For those who want to watch online, the live webcast will begin approximately twenty minutes before liftoff on SpaceX’s YouTube channel and at spacex.com.

The payload for Sunday’s mission, the Intelsat 35e satellite, is built by Boeing, who along with SpaceX is contracted to provide manned space capsules to NASA as part of the Commercial Crew Program.  It is designed for broadband data delivery, Ultra HD television broadcasts, and services for mobile and government customers.  Due to the heavy weight of the Intelsat 35e satellite, there is no plan to attempt recovery of the Falcon 9’s first stage following Sunday’s launch.

SpaceX will have a recovery of a different sort in mind this Sunday though, as the Dragon capsule that has been berthed at the International Space Station since early June is set to return this weekend and is scheduled to splash down on Sunday.  So, if all goes according to plan, the theme for the day will be “one up, one down.”

Once Sunday’s mission is completed, SpaceX will likely turn its attention to its next Dragon resupply mission to the ISS and its first launch of the Air Force’s top-secret X-37B space plane, which some have dubbed the “drone space shuttle.”  Those flights aren’t scheduled until August, however.  After all, even Elon Musk and company deserve a little time to kick back, grill some hot dogs, catch a Dodgers game and enjoy some fun in the sun.

Of course, this is SpaceX we’re talking about, so they’ll probably just head back to 1 Rocket Road and get right back to the business of making history!