Ad Astra Per Aspera: Honoring Our Heroes through Education 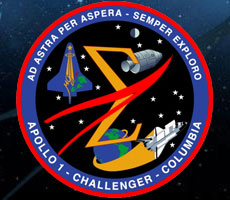 Since the earliest days of this site, I have written annually about a very somber week in the space community.  That week begins today, with the anniversary of the flash fire that occurred on the launch pad during an Apollo 1 test 51 years ago, killing astronauts Gus Grissom, Ed White and Roger Chaffee.  Tomorrow will mark the 32nd anniversary of the mid-launch explosion of the Space Shuttle Challenger, which claimed the lives of astronauts Christa McAuliffe, Gregory Jarvis, Judith Resnik, Francis (Dick) Scobee, Ronald McNair, Mike Smith and Ellison Onizuka.  Just four days later, on February 1, we will see the 25th anniversary of the loss of the Space Shuttle Columbia, which disintegrated during re-entry with the loss of astronauts David Brown, Rick Husband, Laurel Clark, Kalpana Chawla, Michael Anderson, William McCool, and Ilan Ramon.

Over the years I have written so much about these men and women, their bravery, their sacrifice and their willingness to give their lives if it meant that humanity would come one step closer to a future in which living and working out in the black was a regular part of our daily existence.  (If you’d like to read any of it, simply search this site’s archives for any given year in the months of January and February.)  As this week of remembrance approached again this year, I realized that I really didn’t have anything new to say that hadn’t already been said about them.  I felt that at this point, if there is any one thing that bears repeating, it is that they should be remembered as heroes.  Big.  Damn.  Heroes.  Every one of them.

So this year, I would simply like to call your attention to how NASA has decided to honor these astronauts, the crew of Challenger in particular.

Back in 2016, I commemorated this particular week by talking about the “lost lessons” of astronaut-educator Christa McAuliffe, who perished aboard Challenger.  Well, this year NASA has decided to collaborate with the Challenger Center to conduct several of the lessons designed by Christa McAuliffe for her ill-fated space shuttle Teacher in Space mission later this year aboard the International Space Station.

The lessons will be conducted and filmed by astronauts Joe Acaba, who is currently aboard the ISS, and Ricky Arnold, who will launch in March.  These lessons in orbit will be conducted as part of NASA’s “Year of Education on Station,” which takes advantage of the continuing presence of astronaut-educators in orbit, an initiative that was to have been pioneered by McAuliffe and to which NASA remained dedicated after her death.  Both Acaba and Arnold are former educators.

On the NASA website, Mike Kincaid, Associate Administrator for NASA’s Office of Education, said, “Filming Christa McAuliffe’s lessons in orbit this year is an incredible way to honor and remember her and the Challenger crew.  Developed with such care and expertise by Christa, the value these lessons will have as new tools available for educators to engage and inspire students in science, technology, education and math is what will continue to advance a true legacy of Challenger’s mission.”

If you’d like to read more about these “legacy lessons,” you can read NASA’s full press release of January 23 here.

I myself am an educator, and although I do not teach in a STEM field, I certainly recognize the value of STEM-based education if we are to one day become a multi-planet species, something that I personally believe is imperative if the human race is to survive into the next millennium.  I also believe that there is no better way for a person to achieve immortality than to pass on the lessons and skills that he or she has learned to future generations.  For these reasons, I salute NASA and the Challenger Center for their efforts this year, not only because they could inspire the future heroes of the Astronaut Corps, but also because they immortalize Christa McAuliffe and her fellow crew members through her work.

The harsh reality is that the crews of Apollo 1, Challenger and Columbia will not be the last casualties of the dangerous endeavor of exploring space.  If we truly want to ensure that their sacrifice was not in vain, however, we can never let that reality keep us on the ground.

I invite you to join me this evening, as well as tomorrow evening and the evening of February 1, as I honor these men and women by lifting a glass of my favorite “beverage that’ll make you blind” and reflecting on their sacrifice as I remember the words of Joss Whedon’s “Ballad of Serenity:”

Take my love, take my land

Take me where I cannot stand 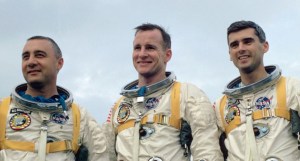 Take me out to the black,

Tell ’em I ain’t comin’ back

Burn the land and boil the sea, 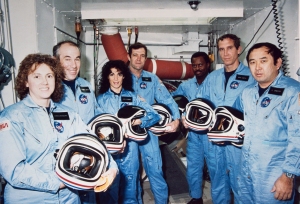 There’s no place I can be

Since I found Serenity. 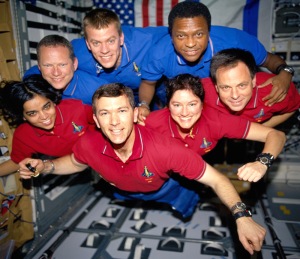 3 comments on “Ad Astra Per Aspera: Honoring Our Heroes through Education”