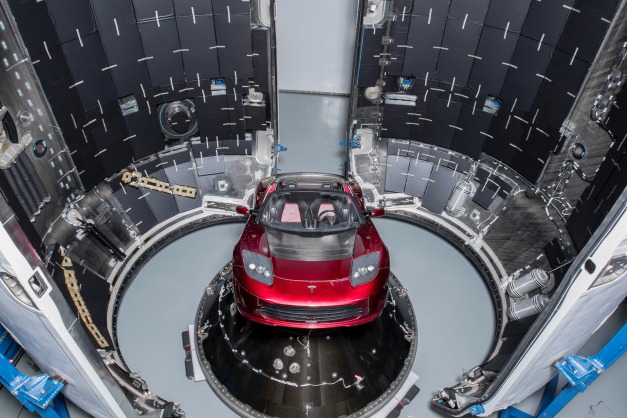 Elon Musk’s personal Tesla Roadster loaded inside the spacious Falcon Heavy payload fairing, which will throw it into a Martian Transfer Orbit during this week’s demonstration launch.

On Tuesday, February 6th, during a launch window that opens at 1:30 PM and ends at 4:30 PM EST, SpaceX will attempt the maiden launch of its newest launch vehicle, the Falcon Heavy.  As a demonstration flight, rather than a commercial or government satellite, it will instead launch a test payload consisting of CEO Elon Musk’s own Tesla electric roadster.

The historic significance of this launch will be lost on most, dismissed by cynics as just another corporation debuting a new product they hope to court the masses with.  What a majority of people fail to realize is that not all rockets are created equal.

The word for today is “heavy-lift vehicle,” a special class of rocket that’s large enough to do very special things.  You see, most rockets are designed for one simple job and a very specific destination in mind:  taking a satellite (or satellites) to an altitude of up to 2,000 km, a height referred to as Low-Earth Orbit, or LEO.  It may surprise many to learn that the very part of outer space in which astronauts fly, and from which most modern conveniences are derived, is referred to by such a diminutive.

To go beyond LEO alone, you have the pay a steep fee to a toll-man by the name of Sir Isaac Newton.  If you can front the cost in fuel and mass budget, though, the most prized and lucrative layer of the heavens awaits:  Geostationary Transfer Orbit, or GTO.  At this altitude, a customer’s payload can deploy from the launch vehicle that delivered it, and proceed under its own power or that of its own supplied mini-booster (called a transfer stage) to a geostationary orbit.  Here, the natural speed of the orbit aligns perfectly with the rotation of the Earth, creating the appearance of a new, stationary star in the sky below.

Geostationary satellites are a boon to communication networks, such as satellite cable television.  This is why those of you who have ever had it simply had to point your little dish in a very specific direction and keep it there:  because the satellite it’s aiming at doesn’t move relative to us here on the ground.

Communications providers and others who wish to benefit from this convenience are willing to pay a premium for it, which is why GTO launches are the most coveted cash cows of the launch industry, a class of business that very few in the world are equipped to pursue– that very few have ever been able to accomplish.

How few? Currently, only three in existence:

You know what else they have in common? Aside from being expensive, they’re all expendable, which is a contributing factor.  Falcon Heavy, the new kid on the block, hopes to bring down the cost through reuse of its boosters to as little as $90 Million to GTO– granted, the landing and re-usability technologies it employs to achieve this cut significantly into its mass budget.  If price is no object, however, it’s still the most economical way to throw something big to where no man has gone before, to the tune of over 60,000 kg– making Falcon Heavy the most powerful rocket in the world, and the most powerful in history since the Saturn V.

Which brings us to the other historic first that’s not a first:  it’ll be the first heavy-lift vehicle capable of taking humans beyond LEO since the space shuttle was retired, because manned exploration missions by definition require a heavy-lift vehicle.  It turns out that all the little things you need to keep a couple people alive– from air to breathe, to seats to sit on– all really add up from a weight perspective.

So, why can’t the existing heavy-lift rockets take on the task? They’re not designed for it.  In order to be deemed safe for humans to ride on (“man-rated”, in launch business lingo), the rocket has to fulfill a litany of requirements and pass a barrage of tests unscathed, including everything from being 100% free of certain toxins often used in fuels, to the much more difficult and expensive requirement of falling within a safe range of vibrations to avoid injuring and killing passengers.

Powerful rockets like the Delta-IV-Heavy aren’t designed to do that, and you can’t blame them– it’s a huge expense for a market that’s “low demand,” to say the least, when there’s such a huge need for satellites in GEO that the Ariane V is booked solid through 2022.  The Falcon Heavy, however, like all SpaceX hardware, has always been designed from day one to get astronauts out into the black safely– what’s more, it can do so at a fraction of the cost, benefitting from SpaceX’s efficient manufacturing methods and innovative design.

So, not only is the Heavy poised to steal a significant share of the heavy-lift market, it’s also well-positioned to make more history.  Currently NASA schedules have SpaceX’s Crew Dragon capsule scheduled to become the first American manned spaceship since the Shuttle, and the first to be built by independent American citizens if it meets its projected launch date next year.  Following that, two as-yet unnamed individuals have actually chartered a flight of the Crew Dragon to a fly-by of the moon, which will of necessity launch aboard the Falcon Heavy– we’re going back to the moon, but this time, for pleasure instead of business.

It all depends on the success or failure of this week’s launch, which, either way, will put on a fireworks show the likes of which Cape Canaveral has not seen in just shy of fifty years.  The world will be watching, along with SpaceX’s own livestream of the event.  What’s more, this launch marks one of the final milestones in Take Back the Sky’s fan campaign to petition SpaceX to name the first manned Dragon after Serenity from the cult-hit sci-fi-western television program Firefly.  With the Falcon Heavy program off to a successful start, one more crucial piece of the puzzle will be in place.

Live footage of the launch may be viewed online through SpaceX’s Facebook page and YouTube channel, both of which are linked at www.spacex.com.  The first opportunity for the launch will be at 1:30 PM EST Tuesday.  The live streams should begin about twenty minutes before the launch window opens.

2 comments on “SpaceX Enters the Big Leagues with Falcon Heavy”