SpaceX Bangabandhu-1 Launch Set for May 10

On May 10, SpaceX is scheduled to launch the Bangabandhu-1 satellite to geostationary transfer orbit from Launch Complex 39-A (LC-39A) at Kennedy Space Center, Cape Canaveral, Florida.

Bangabandhu-1 will be Bangladesh’s first geostationary communications satellite.  Its name means “friend of Bengal,” and it is named in honor of the founding father of the nation of Bangladesh.  It is designed to provide communications services to Bangladesh and surrounding countries for at least the next 15 years.

The Falcon 9 that will carry Bangabandhu-1 into the black is scheduled to liftoff at 16:12 EST (20:12 UTC) on Thursday.  The mission will also feature a landing of the Falcon 9’s first stage at sea aboard the SpaceX drone barge Of Course I Still Love You.

The highlight of the mission, however, will be the debut of the new “Block 5” variant of the Falcon 9.  The Block 5 features a number of design upgrades that are intended to improve the rocket’s efficiency and safety, while allowing SpaceX to refly each first stage booster as many as ten times or more.  (None of the previous Falcon 9 boosters have broken atmo more than twice.) 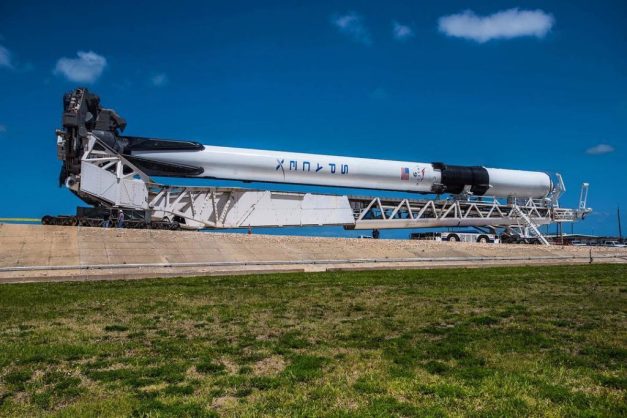 SpaceX founder and CEO Elon Musk released this photo of the rollout of the Block 5 variant of the Falcon 9, which will launch on May 10.

SpaceX has indicated that the Block 5 will be the final variant of their workhorse Falcon 9.  The company will now concentrate on the development of its BFR, or “Big Falcon Rocket,” as well as the production of the Falcon Heavy (the rocket that we hope will soon carry US astronauts to the International Space Station aboard a Crew Dragon named Serenity), while its Block 5 fleet of Falcon 9 rockets handles SpaceX’s ambitious manifest of scheduled commercial satellite launches.

Those who want to see the new Falcon 9 Block 5 in action can watch Thursday’s launch online.  As is usually the case, SpaceX’s live coverage of the launch will begin on spacex.com and the company’s YouTube channel approximately 20 minutes prior to liftoff.