No Rest for SpaceX: Next Starlink Launch Comes on the Heels of Successful In-Flight Abort Test

Earlier today, SpaceX successfully conducted an in-flight abort test of Crew Dragon.  In the words of NASA Administrator Jim Bridenstine, “… This critical test puts us on the cusp of once again launching American astronauts on American rockets from American soil.” 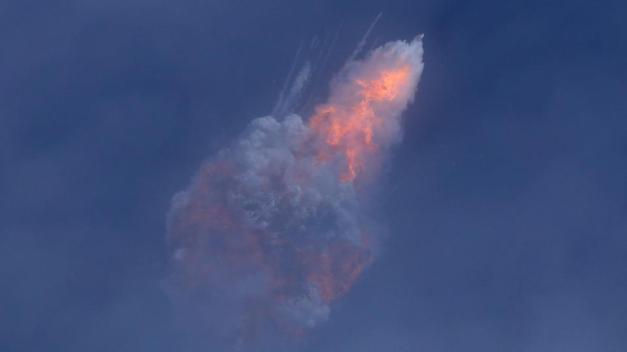 The Falcon 9 disintegrates moments after the Crew Dragon was jettisoned from the booster during SpaceX’s January 19 in-flight abort test.  (Photo:  Reuters)

The test, which was to have been conducted on January 11 but was delayed due to weather concerns at the recovery site in the Atlantic Ocean, launched at 10:30AM EST and went off without a hitch.  Crew Dragon separated from the Falcon 9 booster rocket, which was deliberately disintegrated in spectacular fashion while SpaceX’s new Mark 3 parachutes brought the capsule back to Earth like a downy feather to splash down in the Atlantic.

This was one of the final tests that Crew Dragon had to pass before a crewed demo flight can be greenlit.  It’s reasonable now to expect that just such a flight will occur before the end of this calendar year, which means we only have a few months remaining to convince Elon Musk, Gwynne Shotwell and the rest of the SpaceX brass that the first Crew Dragon to carry astronauts into the black should be named after Joss Whedon’s fictional transport ship Serenity from the movie of the same name and the Firefly television series that spawned it.

If you count yourself among the Browncoats of the ‘verse and you have not yet written a letter to SpaceX asking them to name the Crew Dragon Serenity, now is the time! If you’ve already written a letter, then you have our gratitude, but it honestly couldn’t hurt to write another one.

In the meantime, SpaceX isn’t slowing down one bit.  Tomorrow, the company plans to launch a fourth constellation of approximately 60 satellites for its Starlink broadband network aboard another Falcon 9.  The mission is scheduled to launch from Cape Canaveral Air Force Station in Florida NET 12:20PM EST. Unlike the Crew Dragon’s in-flight abort test, SpaceX will attempt to recover the Falcon 9’s first-stage booster for this Starlink mission on the drone ship Of Course I Still Love You in the Atlantic Ocean.

Those who have the day off from work for the MLK Day holiday and would like to watch the launch can tune in to SpaceX’s live webcast at spacex.com and on the company’s YouTube channel approximately 20 minutes before liftoff.