When Chris and I hatched this harebrained scheme, we didn’t know if anyone else would hop on board. After all, no one had really noticed when the Space Shuttle program ended in 2011, who’s to say they’d notice us, a single voice in the void, let alone sign on with us?

To an extent, no one did — or at least, we didn’t get the reaction/following we’d sought: one last, grand Browncoat fan uprising like the one that showed Universal Studios that there was an audience for them to make a Serenity film. We kept at it, though, covering the launches in person when we could, going to any con that couldn’t keep us out and approaching people with the very weird proposition, even by comic-con standards, of getting involved in spaceflight advocacy.

I’d like to think that we succeeded in that way without intending to: informing the public about the goings on in the black. We’ll never know how many (or few) of the millions of people across the world who watched the live broadcast of the first  launch of astronauts aboard an independent spacecraft did so because of our efforts, but that’s okay. “Mission accomplished,” I say. And I do mean that. Yeah, it would have been shiny if the crew of the Dragon spacecraft had opted to name it Serenity, but it’s more important that people actually paid attention either way for a change.

I saw Behnken and Hurley’s broadcast on my phone while out on a quick shopping jaunt, which feels more like an excursion into a zombie-infested ruined city in the tense rush to get in, get the goods and get out while minimizing exposure in the age of COVID-19. In spite of that, when the cameras went live, I stopped in my tracks in the middle of the aisle. There was just something hauntingly… familiar, intimate. Their broadcast was more of a fireside chat, like the kind the Apollo crews used to do. The backlighting on the capsule walls was clearly designed to look like the soft lighting of an airliner cabin, and looked all the more “homey.”

I was positively riveted by these two men who had welcomed me and the human race into their humble home away from Earth. When they showed how their touchscreen control panels worked, I was suddenly transformed back into a 6-year old fascinated by the shuttle’s controls. Those controls, like Apollo, were riddled with analog switches, dials, buttons with warnings not to push them unless you meant it, harsh angles… almost seeming like it wasn’t hospitable for human life, or was at least something you could easily get lost in. It added to the mystique of the Astronaut Corps, that these men could navigate that maze while we mortals would never be able to.

Contrast that with the simple touchscreen controls we can see aboard the Dragon, and one gets the impression that it’s like any new app on our mobile devices that we could teach ourselves to use. It made the craft seem all the more “approachable,” and I suspect many a child has been inspired anew by it. The cycle continues. 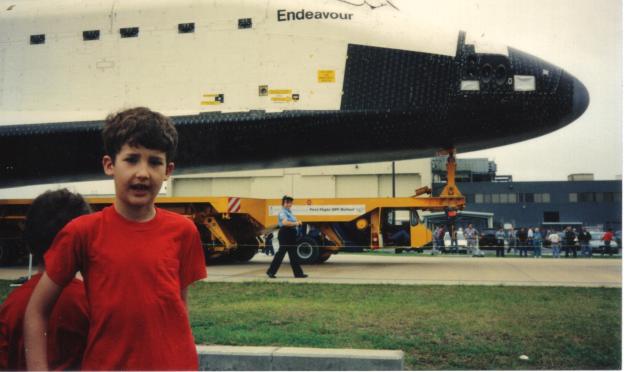 It does for me, too, of course. Those of you who’ve been with us from the start may recall that Shuttle Endeavour is what started me on this trajectory in my life — so, of course I’m not bummed out that they went with it as the name for their craft. It has meaning to them, personally, named for a ship they both loved, and there’s no finer reason in the ‘Verse.

Chris has already written at length about our past; I’d like to say a bit about our future at Take Back the Sky.

First off, we have one.

We spoke at length with each other, batting around more crazy ideas like the good old days. What we concluded was:

We’re taking this site in a new direction, one we think you might actually like more. In addition to the geekdom and nerdery you know and love, we have some ideas and plans to share with you, not just to inform you about what’s going on in space, but to enable you to participate in what goes on up there, in ways that just weren’t possible for us in years past. It’s not ready for prime time yet, but suffice it to say that it’s in the true, independent spirit of the Browncoats, and I can’t wait to share it with you in the days to come.

The ending panels of the Serenity: Those Left Behind graphic novel see Zoe asking her captain for a new course for her pilot husband to chart. Mal replies, “The same way as always… forwards.”

It’s been almost fourteen years since we last saw the crew of Serenity on-screen in the Universal motion picture of the same name.  Since that time, Browncoats who yearn for more stories of the exploits of the crew of their favorite Firefly-class transport ship have had to look to another medium to get their fix– comics.

Joss Whedon and Brett Matthews wrote the first comics set in the Firefly universe back in 2005– a three-issue limited series entitled Serenity:  Those Left Behind.  The series was designed to bridge the gap between the Firefly television series and the motion picture Serenity, and revealed the fate of the two Alliance agents with “hands of blue” while also featuring the return of Lawrence Dobson, the antagonist from the series’ pilot episode.

The three-issue series would be the first of no less than ten original stories set in the Firefly universe that were published by Dark Horse Comics over the next twelve years, some set before the events of the movie Serenity, others picking up the story where the film left off.  The comics, which included four limited series, four “one-shot” stories and one original graphic novel, all appeared under the name Serenity (in part because of property rights issues between Fox and Universal), and many of them were written either by Firefly creator Joss Whedon himself or by his brother Zack.  They are all available now in various trade paperback collections in both hard- and softcover editions from large book retailers like Amazon or Barnes & Noble, as well as at your local comics shop.

This past year, however, the rights to the Firefly comics license changed hands from Dark Horse Comics to Los Angeles-based publisher Boom! Studios, which almost immediately began publication of a new ongoing series about Serenity and her crew that is simply called Firefly.  The inaugural issue of this ongoing series, the first ongoing comics series set in the Firefly universe, made its debut in November of 2018.   It is written by veteran comics writer Greg Pak (whose credits include Action Comics, Hulk, and Battlestar Galactica), with art by Dan McDaid, colors by Marcelo Costa and lettering by Jim Campbell.  The story is set between the events of the final episode of the television series and those of the movie (and also, presumably, before the events of Serenity:  Those Left Behind), so all nine members of Serenity’s crew are featured in the story (something that is no doubt welcome news to Browncoats who are big fans of Wash and Shepherd Book).  So far three issues of the series have gone to print, with the fourth (the conclusion to the series’ first story arc) scheduled to hit shelves in late February.

At this point you might be wondering:  after three issues, is the new Firefly comics series from Boom! Studios a tale that’s going for hard burn, or is it kind of on the drift? Well, if you’d like the honest, relatively spoiler-free opinion of a hardcore Browncoat, who also just happens to be an avid reader and collector of comics with a personal collection numbering in the thousands, then I’m your huckleberry.  Read on, my fellow Browncoats, read on!