Penny for My Thoughts: Speculation on Commercial Crew Assignments

Ni-hao, y’all — Jeff here, Rocket-Scientist-in-Residence here at Take Back the Sky. I’ve been offline for some time now tending to a newly arrived future Browncoat. Last week, NASA finally announced the assignments of which astronauts will be assigned to which flights aboard which independently made American spacecraft. I’m rather surprised that no one is commenting on what’s right there in the open for everyone to see, so I thought I’d offer my two cents here.

On the surface, the only really new information is the announcement of additional crewed test flights, which we’ve all been expecting. Several additional veteran astronauts have been pulled from the roster to fill these missions.

As for when exactly they’ll take place, sources conflict as to which will be first: Boeing’s CST-100 (belatedly rebranded with the more marketable name of Starliner) or the SpaceX Crew Dragon spacecraft. Each and every press release from NASA has maintained that Boeing will lead — in spite of the fact that they’re not ready, and haven’t built a ship in decades, while SpaceX built their first prototype — itself a variant of another craft that they’d already built — years ago. Take from that what you will. The dates of the first voyages of each ship to the International Space Station (ISS) remain TBD.

A wise man once said, however, “ignore what they say, only pay attention to what they do.” NASA, at the end of the day, is deep in the heart of the government machine, and is at the mercy of the same forces that act upon and within it. There’s a certain party line they must always walk, regardless of who is in the White House — certain people they have to keep happy if they want to keep collecting paychecks. Call it the congressional-aerospace-industrial complex. I’m not going to insinuate anything deeper than that, just keep that in mind for context.

Anyway, what NASA, or rather the astronauts, have actually done here is very telling, and I feel it’s also a little at odds with what has been said. Read back through the bios we’ve done on each of the original four Commercial Crew astronauts, then re-read that announcement and compare the backgrounds and experience of the new additions to the team. Notice a trend?

Tell me if I’m crazy here: Colonels Hurley and Behnken (the latter a self-proclaimed Browncoat who had The Ballad of Serenity played over the comms radio during one of his shuttle flights) are the highest-ranking astronauts of the group — as in, they’ve held leadership positions in the Commercial Crew program itself as well as the Astronaut Office, both positions that have authority to make crew assignments.  A third astronaut, Colonel Michael Hopkins, has worked with the Joint Chiefs of Staff at the Pentagon. All three of them wound up on Crew Dragon crews, and I can’t believe that no one is commenting on this.

To be fair, maybe this is all in my head. There’s enough unfounded speculation and wishful thinking on the internet, and I’m loathe to add to it. I can’t help but wonder, though, if this wasn’t the actions of a group of notoriously competitive flyboys once again jockeying (good-naturedly, of course) for the chance to be the first. It’s long been a part of combat pilot culture dating back to the age of Chuck Yeager, and the Astronaut Corps is no stranger to it.

Add to that the matter of one small American flag: A small group of conspiring astronauts (quite possibly the most awesome phrase that I have ever typed into a keyboard) aboard the final flight of the Space Shuttle quietly smuggled a travel-sized stars-and-stripes — the very same one that flew aboard the very first Space Shuttle mission almost four decades ago. Before undocking from the station to return to Earth for the last time, not knowing when or if Americans would ever fly back, they held a ceremony without NASA’s prior approval (the second-most awesome phrase I’ve ever typed) to present it and a small autographed model shuttle to the ISS crew. 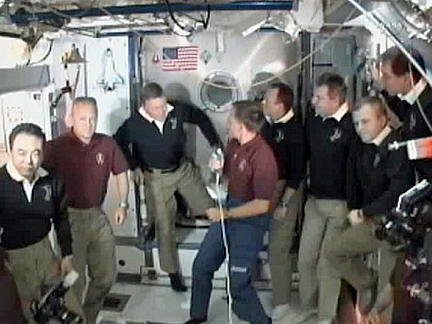 The shuttle model and flag can be seen in the background. Credit: CollectSPACE.com

It’s purpose and significance was two-fold: first, to serve as a memorial to the Space Shuttle itself, one fine ship, if you ask me, and a remnant of an age of American optimism and faith that people can “do the impossible,” as Browncoats would say. The second, though, was to throw down the gauntlet at the feet of a discouraged nation, and to inspire a small community of independent spaceflight providers that needed no further inspiration.

“This flag represents not just a symbol of our national pride and honor, but in this particular case, it represents a goal,” Shuttle Atlantis‘ commander Chris Ferguson said. “This flag will be flown prominently here by the forward hatch of Node 2, to be returned to Earth once again by an astronaut that launches on a U.S. vehicle, hopefully in just a few years.”

Were it not for that fun-size Star-Spangled Banner, the return of American spacecraft would perhaps be largely unnoticed by the public, except for those who actually care enough to seek out news of spaceflight on their own. Now, though, we have what may just be the most high-stakes game of Capture the Flag in all of history, as the pride of a great nation hangs in the balance. I don’t know about you, but I have a hard time believing that the United States’ biggest overachievers wouldn’t gladly pull strings and call in any favors that they could to be the guy or gal who brings that flag home. Who wouldn’t?

So, my theory: this is evidence, to me, that whatever NASA and the powers-that-be say, the astronauts who actually work with the actual ships are clearly backing SpaceX as their horse in the race. Fine by me — I’ve already written a letter to Colonel Behnken to suggest that he may as well use that same clout to name his ship Serenity. Gorrammit but that’d be shiny…

If you’d like to take a moment to congratulate the men and women of Commercial Crew, here are their Twitter handles:

One comment on “Penny for My Thoughts: Speculation on Commercial Crew Assignments”