If a SpaceX Crew Dragon Named “Serenity” Has a Shot, Well It’s Probably Her 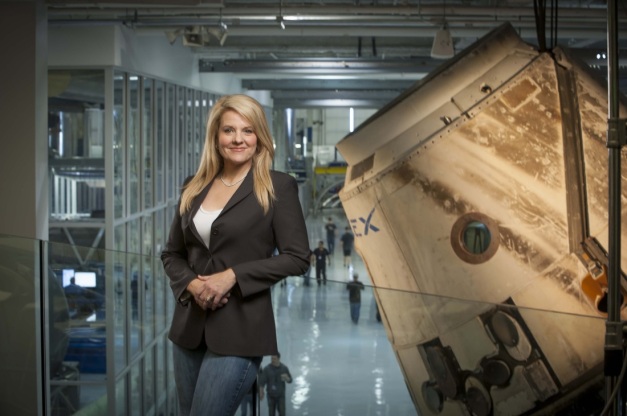 SpaceX President and Chief Operating Officer Gwynne Shotwell has admitted in more than one interview that she and her employees are fans of “Firefly.” (Photo: Teslarati)

In the six years that Take Back the Sky has been campaigning for a SpaceX Crew Dragon named Serenity, we’ve been encouraging people to send cards and letters to the company’s founder and CEO, Elon Musk, asking him to name the first ship of the line after the spaceship in Joss Whedon’s 2002 TV series Firefly.

From 2013-2016, Jeff and I appeared at numerous comics and science-fiction conventions across four states with the same message:  it’s Elon Musk’s ship, and Elon Musk’s money, so, ultimately, the decision as to what the name of the first Crew Dragon will be is going to be his.

While that may still be true, in recent months some developments have led us to believe that Elon Musk himself may no longer be the key player in whether or not our campaign is successful.  With less than a year to go until the Crew Dragon is launched for her first manned demo flight, we now believe that if we are to convince SpaceX to name the ship after Serenity, the person we really need to win over is President and Chief Operating Officer Gwynne Shotwell.  Here’s why…

Elon Musk is kind of busy right now, and it’s hard to tell if he’s just multitasking or genuinely overwhelmed.  Even with the merger of SolarCity and Tesla, the man is still running no less than three companies:  Tesla, SpaceX and the Boring Company.  SpaceX’s operations are at an all-time high, and the Boring Company seems to be still in an experimental phase, but Tesla’s difficulties in matching production to demand for its Model 3 electric sedan have been well documented.  Anyone who keeps up with the news has heard the stories of Musk sleeping on the factory floor while working long hours troubleshooting on the production line, working straight through his birthday and barely making it to his brother’s wedding.  There’s a very good chance that even if our cards and letters calling for Crew Dragon Serenity are making it to his desk, Elon Musk might feel he has other priorities at the moment… like saving Tesla! (And personally, I wouldn’t fault him for that.  After all, I want a Model 3 of my own by the time I retire and give up this life of crime.)

Besides, his engineering genius isn’t the only reason why Elon Musk is considered to be the “real-life Tony Stark.”  The man plays as hard as he works, and there are few who can create a media cyclone quite like he can.  Whether it’s keeping up with the “social demands” of dating younger celebrity women like Amber Heard and Grimes, trading barbs on Twitter with members of the Thai Navy over the validity of his attempts to aid in the rescue of the soccer team that was trapped in a cave in Thailand a couple months back, or “breaking the internet” by sampling Cannabis while a guest on a recent podcast, it’s easy to see how the man could find himself, shall we say… distracted… even during his “down time.”  Now please understand, I have no problem with that.  Someone who has the kind of stressful job he does deserves to be able to let off a little steam, and though he’s been a big damn hero of mine for a while now, I never mistook him for a saint.  Whatever vices and indiscretions he may be guilty of, in my opinion, they are far outweighed by the positive contributions he has made toward ending our dependence on fossil fuels and making humankind a multi-planet species.

But again, Elon Musk’s attention seems to be here, there and everywhere right now, and with the recent announcement that SpaceX is going to send Japanese fashion innovator and globally recognized art curator Yusaku Maezawa and his handpicked posse of artists to the Moon aboard a BFR in what will amount to a modern-day recreation of the Apollo 8 mission, he’s even more likely than ever to have his focus elsewhere at the moment.

Elon Musk and Yusaku Maezawa show off for the cameras.  (Source:  Twitter)

In contrast, whenever we hear from Gwynne Shotwell, she’s always talking strictly about SpaceX and the company’s operations.  She is the one who has been giving the majority of the interviews to media outlets about SpaceX launches and meeting the deadlines and requirements of the Commercial Crew Program.  While Elon Musk handles the dramatic announcements, it’s Gwynne Shotwell who keeps us informed about the day-to-day operations of SpaceX.  To put it in words that Malcolm Reynolds would appreciate, Gwynne Shotwell does the job– and with her focus squarely on projects like the Crew Dragon, it seems she might be the more logical choice to be the focal point of our campaign’s endgame.

And let’s not forget that Gwynne Shotwell is a Browncoat.  She has stated in multiple interviews that she is a fan of both Firefly and Battlestar Galactica, and says she always scores major points with her employees whenever she slips in a Firefly reference at work.  When we contacted her via email a couple of years ago to ask if she knew when and how a name would be chosen for the Crew Dragon and suggested that perhaps the name should be Serenity, she didn’t hesitate to respond enthusiastically, “I love that show! (Firefly!) Good idea.”  She even attached a smiley face emoticon! You don’t have to be a rocket scientist (though if you did, we’ve got one of those on staff) to conclude that she doesn’t dislike the name, and it stands to reason that she might be willing to convince the head of a company who has already named vehicles after fictional ships from other science-fiction properties that the first Crew Dragon should be named after a sci-fi ship for which she herself has an affinity.

So, we’re officially changing our tune.  Yes, it’s still Elon Musk’s ship, and it’s still Elon Musk’s money, and the decision as to what to name the thing will probably still be his.  However, at this point I don’t think the key is so much convincing him to name it Serenity as it is convincing Gwynne Shotwell to persuade him to choose that name.  If I am fortunate enough to appear on another panel at another sci-fi or comics convention before we conclude this campaign, you can bet that’s exactly what I’m going to say.  He might be too busy or too distracted to listen to us at the moment, but I don’t doubt for a second that he’ll take the time to listen to her.

How does this affect our strategy at Take Back the Sky? The only real change is that we’re now asking folk to address their letters, cards, and even “leaves on the wind” to Gwynne Shotwell, and we’ve updated our Take Action page to reflect that.  While every note requesting a SpaceX Crew Dragon named Serenity is going to help regardless of whether its addressed to Elon Musk, Gwynne Shotwell or just SpaceX in general, we now believe the best way to address correspondence would be:

With the first manned demo flight of the Crew Dragon projected to occur early next year, it’s now more important than ever that we send our message that we want SpaceX to name that ship Serenity loud and clear.  If you haven’t written yet, now is definitely the time to send Gwynne Shotwell that card or letter, and if you’ve written to SpaceX in the past, you can always send another card or letter to the company, this time specifically addressed to her.

September 20 marked the 15th anniversary of Firefly, and in that first episode to air on the Fox network back in 2002, Malcolm Reynolds said of the Browncoats, “I’m thinking we’ll rise again.”  Now is the time for that to happen! We need Browncoats all over the ‘verse to rise up, unite and send SpaceX a wave to boost Serenity’s signal.  We’ve done the impossible before, and if this campaign still has a shot, well, we’re pretty sure her name is Gwynne.