A Fond Look Back at “Sending a Wave” 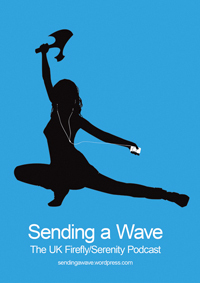 On March 31, the UK Firefly and Serenity podcast Sending a Wave announced that it was coming to an end after twelve years of keeping Browncoats around the world up-to-date on all the latest conjurings in the Firefly fandom throughout the ‘verse.  Sending a Wave will always be very special to all of us here at Take Back the Sky, because the podcast was the first media outlet to interview Jeff and me (way back in the 2012) about our efforts to convince Elon Musk and SpaceX to name their first Crew Dragon Serenity.  Not only did our interview on Sending a Wave spread the news of what we were doing to a worldwide audience, it also gave our campaign a level of legitimacy in the Browncoat community that it hadn’t had previously.  This was especially crucial to the success of our first online petition to SpaceX, which ended up with thousands of signatures from every continent except Antarctica, accompanied by comments in multiple languages.

About a year later we had the pleasure of meeting Wendy Scott, co-creator and host of Sending a Wave, in person at Wizard World Philadelphia Comic Con in June of 2013.  At the con that weekend, Wendy interviewed me again about my work as the event coordinator of Pittsburgh’s Can’t Stop the Serenity charity screenings, and together we attended the Firefly panel that featured Adam Baldwin, Summer Glau, Jewel Staite and Gina Torres.  Wendy is a lovely woman who is tremendously knowledgeable about science-fiction and the film industry and an absolutely fascinating person to talk to.  One of my favorite things about Wendy, both as a podcast host and as a friend, is that her “BS-meter” is finely-tuned, and she’s not afraid to call anyone out if their story has the odor of a fabrication or a retcon.  (If you don’t believe me, you can hear her give me a much-needed history lesson upon our first meeting in Sending a Wave Episode 93:  The One with Dragons!)

When I heard about the end of Sending a Wave, I contacted Wendy to ask her if it would be okay if I achieved some closure of sorts by bringing things full circle and interviewing her about what had been great run of a groundbreaking Firefly and Serenity podcast.  She graciously agreed, and on April 28 we spent nearly three hours on Skype talking about everything from the podcast itself to geek culture, science-fiction of all kinds, Joss Whedon, CSTS, the current state of the film industry and even American and European politics.  As you can guess, that conversation meandered in many different directions.  The following is a transcript of questions Wendy answered that were specific to Sending a Wave: