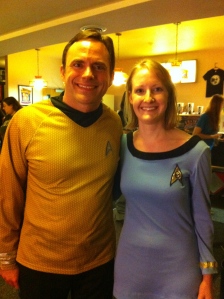 With my friend Liz (who is a science teacher in real life) in the lobby of the Hollywood Theater at “a Steel City Celebration of Star Trek.”

(Note:  This blog post was originally supposed to appear last month, but due to technical difficulties that were beyond our control, it couldn’t be salvaged until now.  We hope you accept our apologies, and that you still find this updated version of the article relevant. — Chris)

Fifty years ago, Star Trek debuted on television screens across the United States.  On September 9, I attended a special screening of Star Trek II:  The Wrath of Khan and For the Love of Spock at Pittsburgh’s historic Hollywood Theater (the very same theater that is featured prominently in the Rocky Horror scenes in the movie The Perks of Being a Wallflower) in honor of that anniversary.  The event was an opportunity for me to return to my sci-fi roots, because while there are few Browncoats whose coats are more of a brownish color than mine, I was a Trekkie long before Joss Whedon read a book about the Battle of Gettysburg and was inspired to create a space-western TV series called Firefly.  So, when it was announced that geekpittsburgh.com was sponsoring “a Steel City Celebration of Star Trek” for the benefit of the Hollywood Theater and Pittsburgh’s ToonSeum (two organizations that have hosted Pittsburgh’s “Can’t Stop the Serenity” screenings in recent years), I was content to leave my browncoat in the closet for one evening in favor of the command gold of a Starfleet uniform (once a cap’n, always a cap’n) and boldly go where I had always so enthusiastically gone before.