So Damned Pretty: 6 Things You Didn’t Know About the Dragon v2 Spaceship

After the presentation, we assume he flew away in an Iron Man armor suit.

If you missed out on last week’s public unveiling of the Dragon v2 spaceship, you really missed out. It had all of the “cool” factor of an Apple product debut–but when was the last time your smartphone shot a 30-foot flame behind it? Tens of thousands of viewers watched online when the sheets were pulled off of it, revealing what will in all likelihood be the first 21st-century spacecraft to take adventurous souls out into the ‘Verse. The media and the general public were blown away by the touted features of powered-descent landings “with the accuracy of a helicopter,” and especially the sleek, futuristic control panel.

The smooth, streamlined touchscreen interfaces made so much of an impression, in fact, that it may have overshadowed some of the other salient details revealed during the event. We thought that, now that the press has had a moment to catch its breath, we’d help read between the lines for you about what was said–and what wasn’t said, but can be deduced.

From an accounting point of view, the development process for Dragon v2 is only 50% complete (Note: While the Falcon rocket was fully funded in private, the cost of the Dragon is split about 50/50 between the company and NASA). What’s more, the first crewed flight is at least 2-3 years away, and a lot can change with the ship in terms of design. The cross between a luxury automobile and high-end mobile device that forms the Dragon’s interior is anything but “final.” SpaceX (and, to be fair, several other private space companies) will continue to consult with NASA and especially the astronauts to settle on a configuration that will be intuitive and easy-to-use for its users and pilots. So, let’s not get too excitable or caught in any flamewars over it.

2. Those funny-looking doohickeys are actually important

During the presentation, CEO Elon Musk showcased some of the subsystems inside the Dragon. One was a SuperDraco thruster engine, a brand new rocket they developed in-house that packs over 16,000 lbs of thrust. The big round thing was a simple pressure tank made from carbon fiber wrapped around titanium, like a super-lightweight space-age paper-mache. It doesn’t seem like that big a deal, until you realize that A). Aside from thrust, the single limiting factor in designing a spaceship is its weight (fuel makes up about 90% of a rocket’s mass) and B). Most of that craft’s weight comes from these big honking metal tanks they have to have to carry fuel or oxygen to burn it with. It represents a huge engineering achievement.

What excited me most, however, as a former propulsion guy, is the chamber for the SuperDraco. This is the first time that major engine components, such as combustion chambers, have been “printed” with the same 3D printers that you hear about in science and tech news on the internet. Personally, I’m excited to see laser sintering–the technology that allows the precisely-engineered chamber to be printed out of metal instead of plastic-based mediums–“trickle down” into the realm of hobbyists and makerspaces some day. Imagine downloading a bicycle, like a physical one and not just the blueprints for one, the same way that you would a song on iTunes.

It’s been rumored for some time that the company that seems like it was a “startup” just yesterday is developing their own 21st-century spacesuits in-house. While not immediately necessary to their plans, it would carry some benefits for SpaceX: not having to shell out millions to purchase from Russia (the current leading provider of space-rated pressure suits), taking advantage of advances in technology to make them out of more advanced materials that are more lightweight and have better thermal properties, and tourist appeal–because huge, bulky suits restrict movement, which doesn’t make it any easier to enjoy yourself, and isn’t exactly flattering for photographs. A couple of new private space companies have sprung up to develop and offer smaller, more flexible suits to serve the new space industry, and some have speculated that SpaceX may intend to follow suit (no pun intended, I swear) in keeping with their M.O. of making everything in-house. Last week’s v2 unveiling, though, convinced me beyond all shadow of a doubt that this is exactly what they’re planning.

How do I know? Ladies and menfolk of the jury, may I present to you Exhibit A in all its glory:

Because I’ll be gorramned if this is getting old any time soon.

The touchscreens in that dashboard, much like the ones in mobile devices, are based off of capacitive sensing technology. Basically, it means that the touchscreen doesn’t actually work by touch. Instead, what the screen actually senses is a change in capacitance in the electrostatic field within it. This change is caused whenever it comes into contact with anything that has different conductive properties than air–specifically, human skin (or a specially made stylus). This is why dropping things on your phone doesn’t usually “press buttons,” and why you can’t really use one while wearing gloves–especially when your gloves have rubber fingertips, as NASA and Russian spacesuits do, which make excellent insulators and thus make it really hard to check into Foursquare during a spacewalk.

—unless, that is, you wear gloves that are specially-made with a strand of silver alloy woven into the fingertips. While the aforementioned agencies are always conducting ongoing research into new space suit designs, they really have no firm plans (let alone budget) to incorporate this handy (sorry) feature into their flight hardware in the near future. If SpaceX is serious about having the secondary controls of the ship be contained within a pair of touchscreens–and they’ve never been known to not be serious when it comes to this sort of shininess–then it actually seems very likely that they’re concurrently developing a space suit that will be more compatible with it.

4. The fins probably have nothing to do with flight

A common misconception I’ve seen come up often in discussions about the unveiling is that the small fins on the sides of the service module or “trunk” behind the Dragon capsule are to somehow stabilize its flight. First off, realize that the rocket that launches the ship into the Black has already been stabilized out the wazoo and doesn’t need the help of fins in the front. We’ll know for sure when SpaceX release more technical detail goodness in the days/weeks to come, but a leading theory among rocket scientists and other experts is that they’re likely a surface for mounting radiators.

Why radiators? One of the great challenges of designing spaceships is the extremes of temperatures that it’ll be exposed to. One minute, you’ll be on the “night” side of the Earth, exposed to the icy void, then suddenly transition to staring at the gorramned sun as you get blasted by its heat, untempered by Earth’s atmosphere. During the voyage to the moon, Apollo ships kept at a slow axial spin to “cook” evenly. Otherwise, the ship would have buckled and cracked like an egg left to boil for too long. Point is, thermal management systems are vital to a spaceship, and, believe it or not, radiators are important in the Black for dumping excess heat into space. Speaking of the trunk…

5. Clipping the wings has its advantages

One other change in the Dragon’s design that you may have noticed is the switch from unfolding solar panel arrays to panels that are fixed to the trunk’s exterior. It’s been speculated that this may have been motivated by difficulties that have arisen on Dragon test flights and cargo resupply missions with the arrays getting stuck and failing to unfold completely. They may have (understandably) gotten sick of trying to fix it, and decided it wasn’t worth the trouble. In this new configuration, the solar panels cover the underside of the craft, which will be kept facing towards the sun, while the windows will face the other way. Obviously, this trades one “failure mode” (a possible way for things for things to “get interesting,” as Wash would put it) for another, as maintaining power to the ship will be dependent on attitude control, the term for how a spacecraft changes which way it’s pointing in space through the use of thrusters or other devices. Usually, this is done by devices that are made to be so simple that there’s very few ways it could go wrong (such as using puffs of compressed gas or fuels than ignite by just combining them like baking soda and vinegar, as opposed to far more complex rockets that use turbopumps and other machines). It’s highly unlikely to be an issue, but nothing’s impossible. Time and testing will tell just how viable the approach is.

6. It still needs a lick of paint on the interior 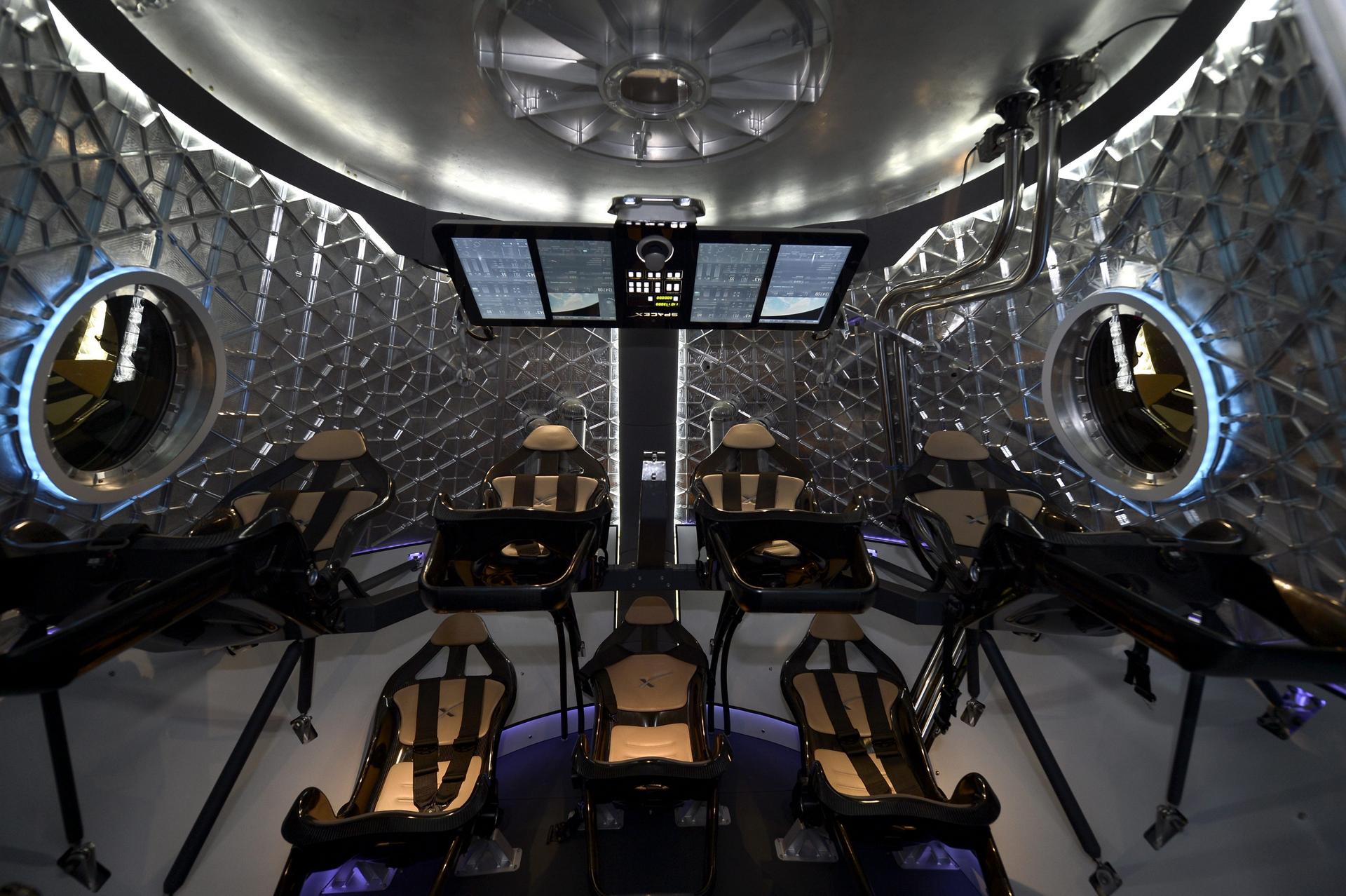 The shiny metallic surface of the walls that we saw when Musk stepped inside are not what it will actually look like inside the real thing. What you saw was the “hexweb” inner surface of the outer pressure hull, like a house lacking drywall. They still have yet to install insulation, wiring, plumbing, then finish it like you would any ordinary house with a ridiculous amount of cabinets and storage space. Still, even then, with all that stuff installed, it’s clear that the Dragon v2 will be one of the roomiest spaceships ever made.

Put it all together, and you have yourself a shiny ship that is inexpensive, reusable, will operate completely independent of The Man, and will be fully capable of travelling all the way to the surface of Mars and beyond.

What to expect in the next year

So, what’s next? There’s only a handful of milestones in NASA’s certification scheme before they’re clear to take NASA astronauts up–but SpaceX has made it clear in no uncertain terms that they have every intent of going forward with or without that contract. Whatever the case, here’s what we will likely see in the weeks and months to come:

The mantle has been passed

One more thing worth mentioning: There was this strong feeling among everyone watching, unspoken by all yet unmistakable, that took me by surprise because I wasn’t expecting it. I’ll have to beg the pardon of our many international Browncoats who stand with Take Back the Sky, but it kinda needs to be said: The Dragon is a ship that Americans can be proud of–and already are. I’m sure that I speak for many when I say that I took one look at that ship and just knew without needing to be told that this was a true heir to the space shuttle, and to the proud tradition it belongs to.

Seeing it there on the stage bathed in spotlights and stage fog made me feel like a six-year-old kid watching the shuttle on TV all over again. And I guaran-gorramn-tee you that there were youth watching the unveiling that night who experienced a moment like Mal falling in love with Serenity at the end of “Out of Gas,” and made up their minds right then that they are going to pursue a STEM career as a direct result. That’s something that, paradoxically, can’t be bought with any amount of money allotted by Congress, yet is worth far more than money could ever buy.

Think the Dragon v2 is awesome? Write or tweet Elon to let him know, and tell him it’d be even better if it were named Serenity!