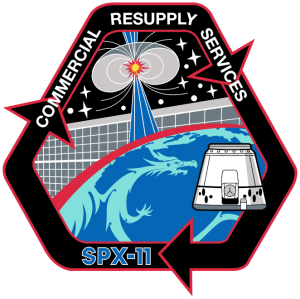 SpaceX is set to launch yet another commercial resupply mission to the International Space Station (ISS).  A Falcon9 will carry an unmanned Dragon into the black from Launch Complex 39A (LC-39A) at NASA’s Kennedy Space Center in Florida at 5:55pm EDT on Thursday evening, June 1 (If no attempt at a launch is possible during the instantaneous launch window, a backup launch window is set for Saturday, June 3 at 5:07pm EDT).

As is often the case with SpaceX launches, this one aims to make a bit of history.  First off, it will be the 100th launch from LC-39A, which has been the site of myriad launches from the Apollo and Space Shuttle programs as well as more recent SpaceX launches.  In addition, the Dragon space capsule being used to support the CRS-11 mission previously resupplied the International Space Station on SpaceX’s CRS-4 mission in September of 2014.

CRS-11 is the eleventh of up to twenty planned commercial resupply missions to the ISS by Elon Musk and company.  This time around, the Dragon will carry almost 3 tons of supplies and payloads, including critical materials that are needed to support many of the more than 250 science experiments that will occur during ISS Expeditions 52 and 53. ISS crew members will use the station’s robotic “Canadarm2” to reach out and capture the Dragon spacecraft and attach it to the station on June 4.  She’ll stay berthed to the station for approximately one month, at which time she’ll return to Earth laden with experiments and other materials being sent home from the ISS and splash down in the Pacific Ocean off the California coast.

And when the Falcon9 breaks atmo and sends the Dragon on her way, the first stage booster will return to land at SpaceX’s LZ-1 landing zone at Cape Canaveral Air Force Station in Florida.  Considered to be impractical if not impossible by many skeptics just a few years ago, this has now become almost a standard feature of SpaceX launches, with the only real question asked nowadays being “will they bring it back by land or by sea?”

CRS-11 is also a special mission for us here at Take Back the Sky, because we hope to convince SpaceX to name the first Dragon 2 variant of this very spacecraft (which is being developed to transport American crews to and from the station as early as 2018) after the transport ship Serenity from Joss Whedon’s sci-fi series Firefly (and the subsequent motion picture that shared its name with the ship).  A successful resupply mission involving a Dragon is always a great opportunity for Browncoats to write a letter to SpaceX founder and CEO Elon Musk and president Gwynne Shotwell to congratulate them on their ongoing success and let them know that they think Serenity would be a very shiny name for the first Dragon to take US astronauts into the black.

SpaceX’s webcast of the launch will go live approximately 20 minutes before liftoff.  We invite you to watch along with us, and envision what it will be like to watch a Dragon named Serenity return US astronauts to space from American soil in the not-so-distant future.