Those words are from Peter Allen’s 1974 song “Everything Old is New Again,” but in a lot of ways, they’re describing how SpaceX is approaching the way it does business today.

Let’s not be misunderstood.  SpaceX is employing a lot of new technology and a lot of innovative techniques that are revolutionizing the space industry.  But one of those new techniques is the reuse of the boosters and vehicles that contain its new technology, and that concept– using old rockets and spaceships for new missions– is something that is rather innovative in and of itself.  Admittedly, even that isn’t a completely new idea– NASA’s Space Shuttle program relied on the same concept to a certain extent– but SpaceX is taking it to new heights.

When SpaceX launches its fifteenth commercial resupply mission to the International Space Station at 5:41am EDT (9:41 UTC) on June 29, there will be a lot about CRS-15, from its Falcon 9 booster to its Dragon capsule and even the launch complex itself, that will feature something old that’s been given new purpose.  The Falcon 9 that will launch CRS-15 into the black was previously flown during the TESS mission two months ago.  The Dragon capsule that it will carry was used during SpaceX’s ninth resupply mission to the ISS back in 2016.  And Space Launch Complex 40 (SLC-40) at Cape Canaveral Air Force Station in Florida, the place from which the mission will liftoff, has a storied history that goes all the way back to the Titan launches in the 1960’s.

The Falcon 9 that will be used for CRS-15 is a Block 4 variant that was last flown during the TESS mission two months ago.  (Photo:  Popular Mechanics)

Elon Musk and his company understand that if you don’t throw the past away, you can reduce the cost of going into the black, and if you can do that, you can do it more often.  In fact, if there are no delays to this launch, it will be the fastest turn-around for a flight-proven Falcon 9 first stage to date.

As for the purpose of the mission– well, that’s all about what’s new.  According to NASA, Dragon will carry just under three tons of research experiments, crew supplies and hardware to the ISS, including a new Canadian-built Latching End Effector, or LEE.  This is essentially the “hand” at the end of the station’s Canadarm2 robotic arm, the grappler that captures payloads and visiting cargo spaceships– including the Dragon on this mission and SpaceX’s Crew Dragon that will someday bring American astronauts to the ISS (the ship that we think should be called Serenity).  The new LEE will replace a failed one that was removed back in 2017 during a series of EVA’s (aka “spacewalks”).

And there’s a more whimsical cargo as well.  Dragon will be carrying a toy dog to the ISS.  The dog, which represents a collaboration with the National Park Service, symbolizes the Newfoundland that accompanied Lewis and Clark on their historic expedition across the United States in the 1800s.  The plushy pooch is meant to commemorate both the 60th anniversary of NASA and the 50th anniversary of the National Trail System.  Browncoats would surely imagine it will end up on a console somewhere in the station, where it might someday star in a private puppet theatre during some of the less demanding moments of an astronaut’s shift. 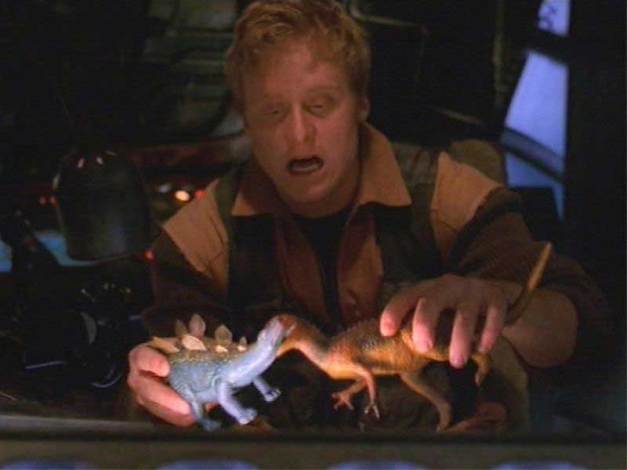 Dragon will reach its preliminary orbit approximately ten minutes after launch, at which point it will deploy its solar arrays and begin its trek to the ISS.  It will arrive at the space station on Monday, July 2.

As for the Falcon 9, the first stage will not be recovered on this mission, as it is an older, outdated Block 4 model that is being phased out in favor of the newer, updated Block 5.

Those early risers who would like to watch Dragon take to the sky and spread her wings on Friday morning can tune in to SpaceX’s webcast, which should go live approximately 20 minutes before liftoff at spacex.com and on the company’s YouTube channel.