“May Have Been the Losing Side…”

COMMANDER HARKEN:  “Seems odd you’d name your ship after a battle you were on the wrong side of.”

MALCOLM REYNOLDS:  “May have been the losing side.  Still not convinced it was the wrong one.”

The event that we here at Take Back the Sky and many others in the aerospace community had been eagerly anticipating for close to a decade has finally came to pass.  At 3:22pm EDT on May 30, 2020, a Falcon 9 rocket lifted off from Launch Complex 39A at Kennedy Space Center in Florida and carried NASA astronauts Doug Hurley and Bob Behnken to the International Space Station aboard the SpaceX Crew Dragon, the first private spaceship to take human beings out to the black.

For just shy of eight years we have been doing everything in our power to lobby SpaceX, its CEO and founder Elon Musk and its president and COO Gwynne Shotwell to name the first Crew Dragon after Serenity, the Firefly-class transport ship in Joss Whedon’s sci-fi TV series Firefly and subsequent motion picture Serenity.  We created online and paper petitions, hosted panel discussions and tabled at science-fiction and comics conventions and science fairs and maintained a steady social media campaign.  We also encouraged members of the space community as well as Browncoats and fans of science-fiction in general to mount a steady letter-writing campaign asking for the name, just as Star Trek fans succeeded in doing in 1976, when it was announced that the first Space Shuttle would be named Enterprise.

As launch day approached, the name of the Crew Dragon remained a closely-guarded secret.  Astronauts Behnken and Hurley announced that they had selected a name for their ship, but they would only reveal it the day of the launch.  Those of us who were still holding out hope for Serenity were somewhat encouraged when the crew used a plush dinosaur as their zero-G indicator, the object in the cockpit that is traditionally left untethered so it will float when the ship reaches orbit.  After all, Serenity’s pilot Hoban “Wash” Washburne famously played around with toy dinosaurs while at the helm in the pilot episode of the TV series Firefly.  When the crew held their first media event from orbit, however, they welcomed the world aboard Crew Dragon Endeavour, a name they had chosen because it held deep personal significance to both of them since both men had previously gone to space aboard the Space Shuttle of the same name.  It was also revealed that the zero-G indicator, a plush apatosaurus named “Trimmer,” was chosen for the flight because both of their sons have an affinity for dinosaurs. 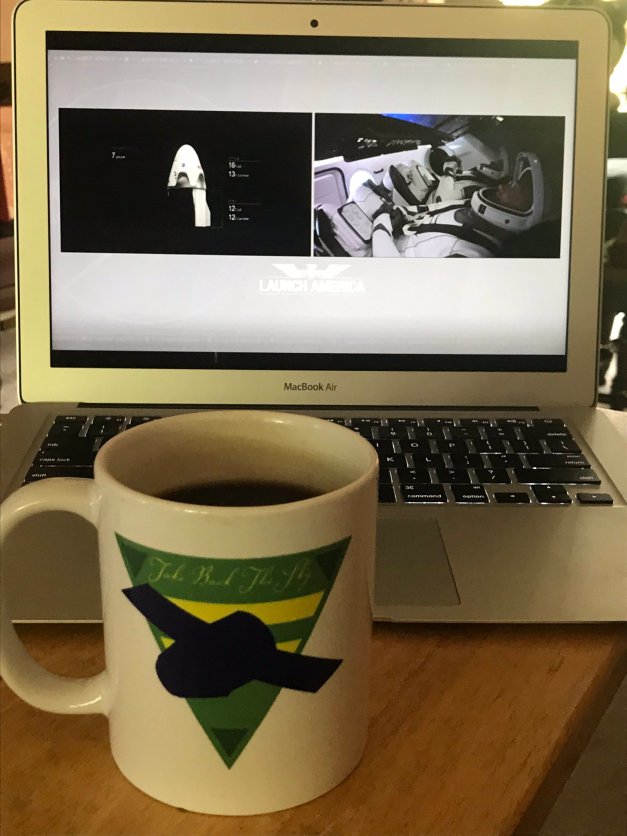 Two Demo-2 launch dates meant over 15 hours of #NASASocial events and #LaunchAmerica coverage– and a whole lot of coffee.

It was hard not to be disappointed when the crew revealed that the ship’s name was Endeavour, not only because it meant that our campaign of 7+ years was unsuccessful, but also because they had chosen what could only be described as a traditional name for such a shiny new class of spaceship.  It was also hard to argue with their reasoning though, and at the end of three days of covering #NASASocial events as part #LaunchAmerica and nearly fifteen hours of following launch coverage across two launch dates (the mission had to be scrubbed due to inclement weather on May 27), whatever disappointment we felt was naturally overshadowed by the fact that the NASA Commercial Crew Program had succeeded in returning American astronauts to space from American soil, and we had backed the right horse to do it first in SpaceX.  It was also impossible not to be thrilled for Doug Hurley, who won the ultimate game of “Capture the Flag” by being the US astronaut to claim the very same American flag he himself had left aboard the ISS at the end of the final Space Shuttle mission with the understanding that is was to be brought home by the crew of the next US spaceship to dock with the station.  In the midst of a worldwide pandemic that had left millions out of work and virtually everyone stuck in quarantine and a week of the most widespread protests and riots the country had seen in decades, the story of Crew Dragon’s Demo-2 flight provided a beacon of light in some very dark times.  SpaceX and NASA had given us reason to be hopeful for America.

And yet, that didn’t change the fact that the Crew Dragon was not named Serenity, and that left me asking:  “What now?”

END_OF_DOCUMENT_TOKEN_TO_BE_REPLACED

You Can’t Take the Moon from Him: Remembering Gene Cernan

A couple of days ago, engineer, naval aviator, Apollo astronaut and “the last man on the moon” Eugene “Gene” Cernan passed away at the age of 82. We know… there’s been a lot of obituaries flooding your social feeds of late, and we won’t drag it out, but this man is worth a few words.

Born and raised in suburban Illinois, Cernan received a degree in Electrical Engineering from Purdue before going on to serve in the United States Navy as an aviator. His career included over 5,000 hours at the stick, and over 200 landings on aircraft carriers.

He was among the third group selected by NASA for the Astronaut Corps. Cernan flew Gemini 9A and Apollo 10, and in the process became the second American spacewalker, pioneering techniques for extravehicular activity and orbital rendezvous that later crews would use.

What history knows him best for, though, was as commander of Apollo 17, the final expedition to the lunar surface, and the bittersweet honor of being the last man to walk on the moon. Cernan and his crew made the best of their time, gathering invaluable surveying data and samples that gave scientists important clues as to the moon’s early history (and he also managed to set the lunar land speed record in the rover while he was at it).

Before climbing the ladder to the lander and turning his back on the “magnificent desolation” of Earth’s moon, he paused and spoke these words to the people of Earth:

“…As I take man’s last step from the surface, back home for some time to come … I’d like to just (say) what I believe history will record: that America’s challenge of today has forged man’s destiny of tomorrow. And, as we leave the Moon at Taurus-Littrow, we leave as we came and, God willing, as we shall return, with peace and hope for all mankind.”

That’s what history remembers him for. I, however, remember him as a man of indomitable passion, more Browncoat than the Browncoats themselves. Heck, he responded to the “moon landing deniers” in the amazing documentary In the Shadow of the Moon (seriously, stream it the next chance you get, it’s one of the best ever made on the space race with beautiful, never-before-seen HD footage) with words that will sound familiar to any fan of Firefly: “Nobody can take those footsteps I made on the surface of the moon away from me.”

I was fortunate enough to meet this brave man when he came to speak at the University of Central Florida. The way that I will remember him will be as a fierce, tireless defender and advocate for getting us back out there in the black. Think about it–  how horrible would it feel to be known as the last man to walk on the moon? As the years pass, I can imagine how it could turn from an honor into a terrible burden. Cernan may well have felt the same, because he continuously testified before Congress, spoke before audiences and anyone who would listen to him that he should NOT be the last.

I don’t know about the rest of you, but when I look at his life and how he spent it after returning to Earth, I can’t avoid looking at myself in the mirror in comparison and asking, “Well, what have you done for that cause?” Indeed, what have each of us done who professes to care and believe in the exploration and colonization of the heavens (which, you’d think, would include any fan of science-fiction franchises like Star Wars, Star Trek, Firefly/Serenity, etc.)? Not to try to guilt anyone (aside from maybe myself) into it, but I really think there is more we could be doing–  not “we” as in “trust everyone else to vote,” but as in you and me, no matter what your background may be.

It’s given me pause to think about how we’ve been going about this little campaign of ours at Take Back the Sky, and it may well inspire a change or two. I’m still thinking it all over in my mind, and I’ll keep you posted of any epiphanies that come to me.

But for now, Godspeed, Captain Cernan.  It is our hope that mankind will, in the not-too-distant future, once again follow in your footsteps.

What I Did on My Summer Vacation: a Visit to the Johnson Space Center

I let my wife Richelle choose the destination of our family vacation this year.  I figured she’d more than earned that right.  After all, she had been willing to let me go off to a major con in Philadelphia for four days in late spring, and had put up with my taking over the job of organizing Pittsburgh’s annual Can’t Stop the Serenity events.  She also agreed with the idea of our traveling to Germany next summer with a group of my students and their parents instead of taking a family vacation.

When she said she’d like to go to Houston, Texas for a few days to visit her sister Laurie and her family, I was on board without hesitation.  My previous experiences in Texas were overwhelmingly positive, and I enjoy spending time with Laurie, her husband Steve and their two kids, who are both about the same age as my son.  Since this would be the first time we visited them since they moved to Houston from Austin, I was also looking forward to seeing what the city of Houston had to offer, and I was especially enthusiastic about the prospect of visiting the Johnson Space Center. END_OF_DOCUMENT_TOKEN_TO_BE_REPLACED