The Browncoats Launch Party That Could Have Been

Even with the COVID-19 pandemic dominating the news these days, excitement and buzz continue to mount for the crewed demonstration flight of SpaceX’s Crew Dragon (DM-2), which is scheduled to launch on May 27 at 4:33pm EDT (2033 GMT) from Cape Canaveral Air Force Station in Florida and carry NASA astronauts Bob Behnken and Doug Hurley to the International Space Station.

Since 2012, we here at Take Back the Sky have been lobbying for SpaceX to name this Crew Dragon after Serenity, the fictional Firefly-class transport ship in Joss Whedon’s science-fiction television series Firefly and subsequent motion picture Serenity.  We’ve traveled to sci-fi and comics conventions across the East Coast, and we launched two online petitions and conducted numerous pen-and-paper petitions at cons, science fairs, Can’t Stop the Serenity screenings and Browncoat Balls.  We also encouraged Browncoats and space enthusiasts to send letters, postcards and even leaves to SpaceX founder and CEO Elon Musk and president and COO Gwynne Shotwell asking them to christen the ship with that name.

Just this past weekend, the crew informed the media that they have in fact decided on a name for the spaceship, which they won’t reveal until the day on which she launches.  That means right up until launch day, we still have a chance of success in our labor of love of nearly eight-years, but ultimately, when Crew Dragon takes Bob Behnken and Doug Hurley out to the black, she’ll either be called Serenity or she won’t.

Jeff and I started this campaign eight years ago when we discovered we shared a common goal while posting about the topic on the Yahoo message boards of the Pennsylvania Browncoats.  From the very beginning, we talked about how positively epic the launch party for a spaceship named Serenity would be.  If there’s one thing Browncoats know how to do, it’s throw a mighty fine shindig.  Anyone who’s been to a Can’t Stop the Serenity charity event or a Browncoat Ball, or remembers the turnout at San Diego Comic-Con for the celebration of Firefly’s 10th anniversary, knows exactly what I’m talking about.  As someone who has been passionately involved with the Browncoat community for nearly a decade, I promised myself that I would personally see to it that a crewed spaceship named Serenity had a launch party that Browncoats everywhere in the ‘verse could not only be proud of, but would want to be a part of. 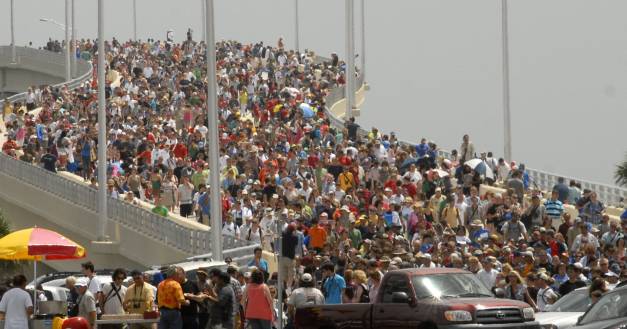 END_OF_DOCUMENT_TOKEN_TO_BE_REPLACED

It’s Been a Long Road: Manned Dragon Spacecraft Scheduled to Launch This Month

NASA has scheduled the first crewed launch of SpaceX’s independently designed and developed Dragon spacecraft for 4:32 p.m. EDT (2032 GMT) on May 27, 2020 (barring unforeseen delays, such as a high probability of adverse weather). Astronauts Bob Behnken and Doug Hurley will be the first American astronauts to go into space aboard an American-made ship since the former Space Shuttle program. END_OF_DOCUMENT_TOKEN_TO_BE_REPLACED