Why SpaceX and “Serenity” Are Perfect for One Another

For nearly four years now you’ve been listening to us tell you all the reasons why Serenity is the perfect name for the next manned US spacecraft.  If you’re a Browncoat, you probably didn’t take much convincing, but even those who aren’t big fans of the series Firefly or the film Serenity would most likely still agree that the name Serenity embodies the ideals of 21st-century space exploration, which is certainly built more upon a foundation of peace and cooperation than the space race of the Cold War era was.

But some of you may still be asking yourselves, “Why are they so fixated on SpaceX?” After all, it was NASA who chose the name Enterprise at the urging of tens of thousands of letter-writing Star Trek fans, and NASA is still the driving force (and paying customer) behind the Commercial Crew Project.  Besides, if what we read in the press is to be believed, NASA wants Boeing’s CST-100, not SpaceX’s Dragon 2, to be the first manned US spacecraft to break atmo since the Space Shuttle Atlantis launched into the black for the final time (on this very date four years ago).

Given the fact that SpaceX’s unmanned Dragon has already completed six successful resupply missions to the International Space Station and Boeing’s CST-100 has yet to leave the launch pad, I’m sure there is a lot of room for debate as to which ship will be ready to make the trip first.  But we’ll save that debate for another time.  Suffice it to say that we believe that when the chips finally hit the table, it’s going to be SpaceX’s Dragon v2 that’ll be ready to answer the call.

But that’s not the only reason why we’re focusing our efforts on SpaceX instead of NASA or Boeing.  It’s also because we believe that SpaceX, unlike the others, cares about the relationship between pop culture and the space industry.  In short, Elon Musk, Gwynne Shotwell and the vast majority of their employees at SpaceX are our kind of people.  And that’s not just some vibe we’re getting.  You only need look at their track record to see exactly what we’re talking about.

Elon Musk has openly admitted that the Falcon 9, like its Falcon 1 predecessor, is named after the Millennium Falcon, Han Solo’s ship in Star Wars.  From the very beginning, he broke with the tradition of naming rockets after figures from classical Greek and Roman mythology (Titan, Saturn, Atlas, etc.), opting instead to choose a name from a more modern mythology that would capture the imagination of the public and allow the average person to perceive a relevance to his or her interests (in much the same way casual viewers tend to back a horse to win the Kentucky Derby because they like the horse’s name).

Given the origin of the Falcon’s moniker, you might expect the Dragon to have gotten its name from a popular work of fantasy like The Hobbit, but Elon Musk has said he actually named the Dragon after the hit song “Puff the Magic Dragon” by the music group Peter, Paul and Mary.  The name was chosen in response to critics who said Musk’s goals were impossible when he first founded SpaceX in 2002 (back in the days before SpaceX did the impossible and it made them mighty).  While we can’t be sure, we reckon he probably had these lyrics in mind:

Once again, though, the name comes from a pop-culture source (in this case, a song) with which “the common folk” are familiar.  Not many young people today are well versed in the stories of classical mythology, but most of us, even those of us who aren’t children of the 60’s, still know the melody to “Puff the Magic Dragon” and can tell you where he lived.  With names like Falcon and Dragon, SpaceX is already establishing itself as “the people’s rocket company,” appealing to the child in each of us and awakening our child-like curiosity with references to galaxies far, far away and magic dragons that live by the sea.  SLS and CST-100, though? Not so much.

When it came to naming SpaceX’s drone-piloted barges that are built to serve as floating landing platforms for the Falcon 9’s first-stage, which SpaceX hopes will soon make VTOL landings at sea and usher in a new era of rocket reusability, Musk chose names that demonstrate his sense of humor while at the same time staying true to his penchant for pop culture.  After the first attempt to land a Falcon 9 booster on the barge, during which the first stage came in way too hot and crashed on the deck, the words “Just Read the Instructions” were painted on the deck and the barge itself was christened with that same name.  When the second barge was named shortly after a second failed landing that was also a near miss, it was emblazoned with the words “Of Course I Still Love You.”  Both names are references to science fiction novels by Iain M. Banks.

It’s clear that Elon Musk understands the value of fandom as a force that both inspires and takes inspiration from the hard science of the space industry, but the fact that he consistently names his company’s vehicles using references to these beloved works says something more.  It speaks to the fact that he, like us, is also a fan.  After all, this is the same man who offered the use of SpaceX facilities for the filming of Iron Man 2, a film in which he also has a cameo (as himself) and converses with Robert Downey, Jr.’s Tony Stark, a character that director Jon Favreau admits was at least partially inspired by Musk.  This is the same man who said at the recent ISS Research & Development Conference that he enjoyed Andy Weir’s book The Martian, but worries that the upcoming movie may discourage people from wanting to go to Mars, and then went on to say that what we really need are movies about Mars that have gunslingers and cowboys.  Hmm… a film that takes place on another world and features gunslinging cowboy types… that sounds sort of familiar! 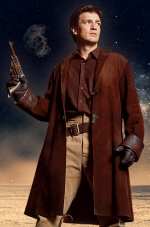 And we’re pretty sure Elon Musk isn’t the only one at SpaceX who would appreciate the name Serenity.  SpaceX president and chief operating officer Gwynne Shotwell admitted during an interview with National Public Radio that Firefly is her favorite science-fiction television show! That’s why we’ve been urging people to send letters asking SpaceX to name their first Dragon 2 Serenity not only to Elon Musk, but to her as well.

In the end, though, the decision as to what the first Dragon 2 will be called is likely to be Elon Musk’s to make.  After all, it’s his company, his money and his ship, and as far as we know, he’s had a major say in naming all of SpaceX’s other craft.  That’s good news, because what it is likely to come down to is the fact that he just likes using names from popular sci-fi. That’s why we think he’ll agree that Serenity is a name that perfectly represents the spacefaring America of this generation, one that values freedom and inclusiveness, and one that looks forward to the day when people of every race, creed and station in life can say with confidence, “You can’t take the sky from me.”

We believe that there is no better company than SpaceX to name its first manned spacecraft Serenity.  It’s why we are not discouraged by reports that some other company might get the chance to launch American astronauts into space before SpaceX does.  We don’t doubt for a moment that this campaign can succeed.  We do not need to convince the nation, or a federal administration, or even an entire corporation.  We only need to convince one man.  And when you get right down to it, he’s a geek just like us.

Until next time, peace, love and rockets.